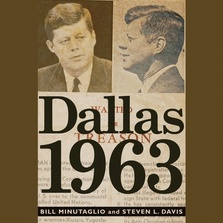 Named one of the Top 3 JFK Books by Parade Magazine.

Named 1 of The 5 Essential Kennedy assassination books ever written by The Daily Beast.

Named one of the Top Nonfiction Books of 2013 by Kirkus Reviews.

In the months and weeks before the fateful November 22nd, 1963, Dallas was brewing with political passions, a city crammed with larger-than-life characters dead-set against the Kennedy presidency. ...

Bill Minutaglio's work has appeared in The New York Times, Esquire, Newsweek, Texas Monthly, Outside and many other publications. He has worked for The Dallas Morning News, Houston Chronicle and San Antonio Express-News and is the author of several critically acclaimed books, including biographies of President George W. Bush, Molly Ivins and Alberto Gonzales, and a narrative retelling of the greatest industrial disaster in American history. He lives in Austin, Texas.

Steven L. Davis is the author of two highly praised books on Texas culture, and his work has appeared in Texas Monthly, Texas Observer, San Antonio Express-News, Southwestern American Literature, and Texas Books in Review. Davis is a long-time curator at the Wittliff Collections at Texas State University-San Marcos, which holds the literary papers of Cormac McCarthy, Sam Shepard, and many other writers. He lives in New Braunfels, Texas and grew up in Dallas.