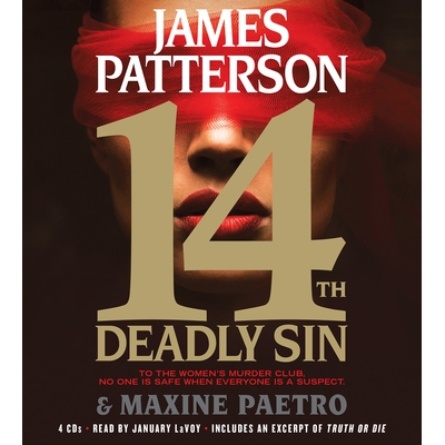 With a beautiful baby daughter and a devoted husband, Detective Lindsay Boxer can safely say that her life has never been better. In fact (for a change), things seem to be going well for all the members of the Women's Murder Club as they gather to celebrate San Francisco Medical Examiner Claire Washburn's birthday. But the party is cut short when Lindsay is called to a gruesome crime scene, where a woman has been murdered in broad daylight.

As Lindsay investigates, shocking video footage of another crime surfaces. A video so horrific that it shakes the city to its core. Their faces obscured by masks, the cold blooded criminals on the tape could be anyone-and now all of Lindsay's co-workers are suspects. As a rash of violence sweeps through San Francisco, and public fear and anger grows, Lindsay and her friends must risk their lives in the name of justice-before it's too late.

With shocking twists and riveting suspense, 14TH DEADLY SIN, proves yet again that when it comes to suspense fiction, in the words of Jeffrey Deaver: "nobody does it better" than James Patterson.

"I can't believe how good Patterson is, whether he's doing a Washington police yarn or traveling a different road with a female narrator. He is always on the mark. I have never begun a Patterson book and been able to put it down."—Larry King, USA Today
FANS LOVE THE WOMEN'S MURDER CLUB!
"Those who haven't read any of the novels in the Women's Murder Club series are cheating themselves."—BookReporter.com
"Patterson and Paetro are at their best here, weaving a number of plots together to create a novel that dips and flows across genre lines.... A series that shows no signs of fatigue or flagging."—BookReporter.com