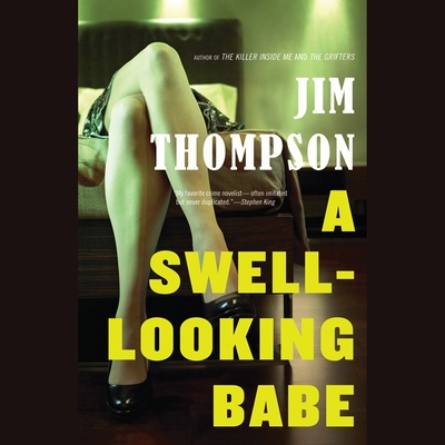 Marcia Hillis. The perfect woman. Beautiful. Experienced. Older and wiser. The only woman to ever measure up to that other her--the one whose painful rejection Dusty can't quite put from his mind.

But while Dusty has designs on Marcia, Marcia has an agenda of her own. One that threatens to pull the Manton inside-out, use Dusty up for all he's worth and leave him reeling and on the run, the whole world at his heels.

A richly-imagined crime narrative of the Oedipal and betrayal, A SWELL-LOOKING BABE is Thompson at his very best--a cornerstone in Thompson's enduring legacy as the Dimestore Dostoyevsky of American fiction.

"The master of the American groin-kick novel."—Vanity Fair
"My favorite crime novelist-often imitated but never duplicated."—Stephen King
"The most hard-boiled of all the American writers of crime fiction."—Chicago Tribune
"If Raymond Chandler, Dashiell Hammett and Cornell Woolrich would have joined together in some ungodly union and produced a literary offspring, Jim Thompson would be it...His work...casts a dazzling light on the human condition."—Washington Post
"The best suspense writer going, bar none."—The New York Times
"Like Clint Eastwood's pictures it's the stuff for rednecks, truckers, failures, psychopaths and professors ... one of the finest American writers and the most frightening, [Thompson] is on best terms with the devil. Read Jim Thompson and take a tour of hell."—The New Republic