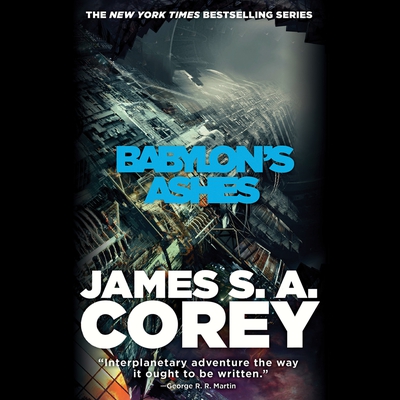 A revolution brewing for generations has begun in fire. It will end in blood.
The Free Navy - a violent group of Belters in black-market military ships - has crippled the Earth and begun a campaign of piracy and violence among the outer planets. The colony ships heading for the thousand new worlds on the far side of the alien ring gates are easy prey, and no single navy remains strong enough to protect them.
James Holden and his crew know the strengths and weaknesses of this new force better than anyone. Outnumbered and outgunned, the embattled remnants of the old political powers call on the Rocinante for a desperate mission to reach Medina Station at the heart of the gate network.
But the new alliances are as flawed as the old, and the struggle for power has only just begun. As the chaos grows, an alien mystery deepens. Pirate fleets, mutiny, and betrayal may be the least of the Rocinante's problems. And in the uncanny spaces past the ring gates, the choices of a few damaged and desperate people may determine the fate of more than just humanity.
The Expanse Leviathan WakesCaliban's WarAbaddon's GateCibola BurnNemesis GamesBabylon's Ashes
The Expanse Short Fiction The Butcher of Anderson StationGods of RiskThe ChurnThe Vital Abyss

"Riveting interplanetary thriller."—Publishers Weekly on Leviathan Wakes
"The Expanse series is the best space opera series running at full tilt right now, and Cibola Burn continues that streak of excellence."—io9 on Cibola Burn
"Combining an exploration of real human frailties with big SF ideas and exciting thriller action, Corey cements the series as must-read space opera."—Library Journal (Starred Review) on Cibola Burn
"Literary space opera at its absolute best."—io9.com on Abaddon's Gate
"A politically complex and pulse-pounding page-turner.... Corey perfectly balances character development with action... series fans will find this installment the best yet."—Publishers Weekly on Abaddon's Gate
"High adventure equaling the best space opera has to offer, cutting-edge technology, and a group of unforgettable characters bring the third installment of Corey's epic space drama (after Caliban's War and Leviathan Wakes) to an action-filled close while leaving room for more stories to unfold. Perhaps one of the best tales the genre has yet to produce, this superb collaboration between fantasy author Daniel Abraham and Ty Franck should reawaken an interest in old-fashioned storytelling and cinematic pacing. Highly recommended."—Library Journal on Abaddon's Gate
"The science fictional equivalent of A Song of Ice and Fire...only with fewer beheadings and way more spaceships."—NPR Books on Cibola Burn
"[T]he authors are superb with the exciting bits: Shipboard coups and battles are a thrill to follow."—Washington Post on Abaddon's Gate
"A standout tale of violence, intrigue, ambition, and hope. ... Corey cranks up the tension relentlessly in this fast-paced story of heroes and rebels fighting for freedom. With enough thrills and intrigue for three Hollywood blockbusters, the novel stands alone nicely, making it easy for new readers as well as diehard series fans to dive right in."—Publishers Weekly on Nemesis Games
"Corey's splendid fourth Expanse novel blends adventure with uncommon decency."—Publishers Weekly (Starred Review) on Cibola Burn
"An excellent space operatic debut in the grand tradition of Peter F. Hamilton."—Charles Stross on Leviathan Wakes
"It's been too long since we've had a really kickass space opera. Leviathan Wakes is interplanetary adventure the way it ought to be written, the kind of SF that made me fall in love with the genre way back when, seasoned with a dollop of horror and a dash of noir. Jimmy Corey writes with the energy of a brash newcomer and the polish of a seasoned pro. So where's the second book?"—George R. R. Martin on Leviathan Wakes