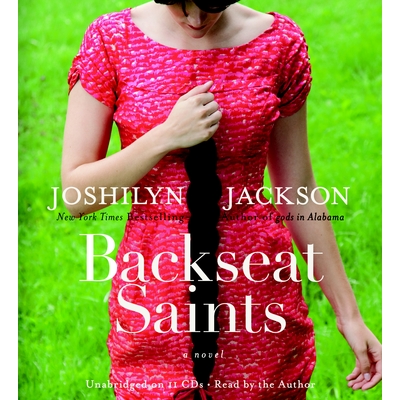 Hot-blooded Rose Mae escapes from under Ro's perky compliance and emerges with a gun and a plan to beat the hand she's been dealt. Following messages that her long-missing mother has left hidden for her in graffiti and behind paintings, Rose and her dog Gretel set out from Amarillo, TX back to her hometown of Fruiton, AL, and then on to California, unearthing a host of family secrets as she goes. Running for her life, she realizes that she must face her past in order to overcome her fate---death by marriage---and become a girl who is strong enough to save herself from the one who loves her best.

BACKSEAT SAINTS will dazzle listeners with a fresh and heartwrenching portrayal of the lengths a mother will go to right the wrongs she's created, and how far a daughter will go to escape the demands of forgiveness. With the seed of a minor character from her popular best-seller, GODS IN ALABAMA, Jackson has built a whole new story full of her trademark sly wit, endearingly off-kilter characters, and utterly riveting plot twists.

"While set in the languid deep South, the pace is rapid. Jackson's reading keeps things brisk without going too swiftly. Jackson's excellent reading allows characters' voices to reveal much about their histories and personalities: Laurel's gentle but determined manner, her outrageously funny sister's sarcasm, the thick drawl of an impoverished girl visiting from Alabama. A brief interview with Jackson at the end offers some insight into the book's genesis and development and into her writing habits."—Publishers Weekly on The Girl Who Stopped Swimming
"Joshilyn Jackson is a storyteller whose clarity and elegant poetry are worthy of the tradition of our great Southern writers. The really big surprise is her reading. Jackson reads with energy, enthusiasm, and the finesse of an accomplished voice actor. Her artful characterizations draw listeners into Nonny's world, filled with quirky, genuine, and original characters."—AudioFile Magazine on Between, Georgia