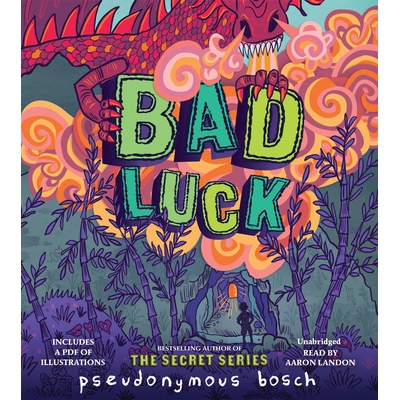 
Some people have all the luck.
Unfortunately, Clay isn't one of them: He's the only camper at Earth Ranch without a magical talent. As if feeling totally useless isn't enough, Clay has to figure out what to do about Brett, a castaway boy who has just washed ashore and is determined to keep his presence a secret. Even as Clay helps his new friend hide in the remote volcanic island's wilderness, another fiery mystery begins to emerge, with all signs pointing to the impossible idea that dragons once roamed the island...and may still. Can Clay and his friends turn their luck around in time to uncover Price Island's secrets--and save it from a scorching end?
Danger, adventure, mischief, mystery, old foes, new friends, and a delightfully elusive narrator make bestselling author Pseudonymous Bosch's latest novel completely irresistible.

"Bosch's humorous, intrusive narration is liberally applied to this engaging adventure...Readers will be thoroughly entertained by this second installment in the Bad Books series."—Booklist
"[Bad Magic] contains threads of mystery, magic, word games, and snark... It is suspenseful, humorous, clever, and most importantly, fun. Bad Magic is definitely entertaining for a wide range of readers."—Voya
"...Bosch's mix of slapstick silliness, sly authorial asides, and magical adventure will appeal to readers of Lemony Snicket and M. T. Anderson's Pals in Peril series."—Booklist
Praise for Bad Magic:"Bosch employs, to great effect, his signature irreverence and hilarity... a delight to read. Bad Magic is a clever and playful novel. An excellent addition to middle grade fiction collections."—School Library Journal
"Bosch fans will be thrilled at the reappearance of characters from his Secret Series, but the good fun and solid adventure will delight new readers just the same. ...An excellent addition to middle grade collections."—School Library Journal
"Enjoyable... Bosch's arch narrative voice carries over from his previous books...From The Tempest and Lord of the Flies to shows like Gilligan's Island and Lost, cultural allusions abound as Clay tries to understand the island's many mysteries and meets his fellow campers. Gilbert's watercolors bring in additional humor."—Publishers Weekly