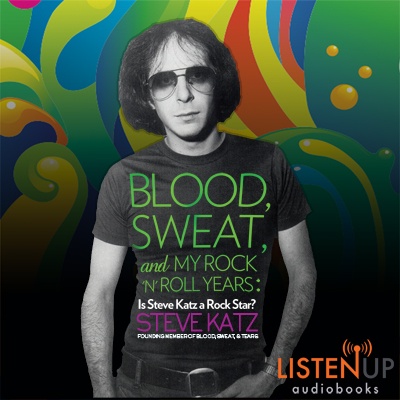 in stock
Blood, Sweat, and My Rock 'n' Roll Years
(Unabridged)
add to wishlist give as a gift Play Sample

When you look at Steve Katz's career on paper, it rivals that of some of the biggest rock stars of the 1960s and 70s. Katz performed at the Monterey Pop ...

When you look at Steve Katz's career on paper, it rivals that of some of the biggest rock stars of the 1960s and 70s. Katz performed at the Monterey Pop Festival with the legendary Blues Project, he was at Woodstock with Blood, Sweat, & Tears, he even produced Lou Reed, rock's most celebrated speed addict. Katz was part of world tours, he has three Grammy wins and ten nominations. He won three Downbeat Reader's Poll Awards, he has three gold records, one platinum record, and one quadruple platinum platter, not to mention the three gold singles with Blood, Sweat, & Tears. All together, Katz has sold close to 29 million records. His resume screams "Hall of Fame" - it shouldn't be long before Blood, Sweat, & Tears are nominated.

Katz had affairs with famous female folk singers, partied with Elizabeth Taylor and Groucho Marx, shared conversations with Martin Luther King, Jr. and Tennessee Williams, jammed with everyone from Mose Allison to Jimi Hendrix, dined with Rudolf Nureyev, and was told to get a haircut by both Micky Spillane and Danny Thomas.

Katz's memoir, though, is closer to Portnoy's Complaint than the standard lurid party-with-your-pants-down-memoir of other rock 'n' roll books. Blood, Sweat, and My Rock 'n' Roll Years is an honest and personal account of life at the border of the spotlight. From that privilegd vantage point, Katz gained a bit more objectivity and earnest outrage than many of his colleagues too far into the scene to provide an honest witness to it. Set during the Sixties' folk rock scene of Greenwich Village, some of the most celebrated venues and concerts, and behind closed doors of international tours and grueling studio sessions, this is the unlikely story of a rock star as a nerd, nerd as a rock star. This is the tale of a nice Jewish boy who got to sit at the cool kid's table and score the hot chicks.

“My friend Steve Katz was a nice Jewish boy who became a big star. Happily he is now a nice Jewish gentleman who lived the rock’n’roll lifestyle and lived to tell the tale in this wickedly funny insight into the decadent days of the music world of the 60s and 70s. I was there – it’s all true!”
--Terry Ellis Co-founder of Chrysalis Records

"Steve Katz's book opens the door on a magical time when the counterculture -- and the transformations of youth in New York, and California, and all of America -- were flowering. With a light touch and a wry intimacy, he adds to an important history: our own."
-- Sheila Weller, author of the bestselling Girls Like Us: Carole King, Joni Mitchell, Carly Simon -- and the Journey of a Generation

"I love love love Steve Katz's new book about Blood Sweat and Rock and Roll - a dizzying, delicious, head spinning heart-wrenching tale of the Sixties and what even those of us who were there might have missed--stories of the great band he was part of, that tore up the charts while the music rolled up the avenues of the world. Touring, the treasures and torments, faces and voices- Joni in the dark and light, Al Kooper in the day and night, Mimi in the morning at Judy's house, Danny Kalb in the aftermath of Monterey, Janis Joplin in profile. It is a great ride, both for those who were there and never saw the other side of the story, and those who weren't, and want to know what really happened in the Cafe Wha, the Gaslight, Bitter End in New York, Monterey Pop and the Woodstock that happened off-stage. Great book, great read, great life."
-- Judy Collins, singer, writer and survivor of the Sixties


“Katz engagingly recounts fascinating stories in an insightful, intelligent, sometimes wistful and sometimes funny style that makes this one of the few rock memoirs worth reading from beginning to end.”
--Publishers Weekly