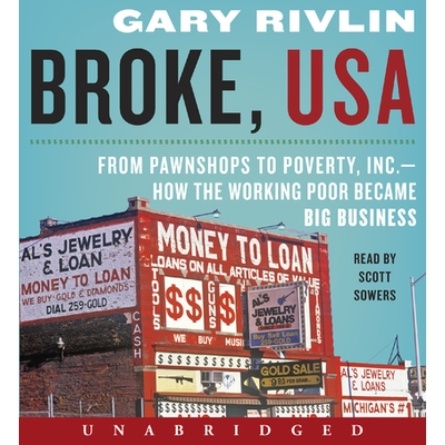 in stock
Broke, USA
(Unabridged)
add to wishlist give as a gift Play Sample

For most people, the Great Crash of 2008 has meant troubling times. Not so for those in the flourishing poverty industry, for whom the economic woes spell an opportunity to ...

For most people, the Great Crash of 2008 has meant troubling times. Not so for those in the flourishing poverty industry, for whom the economic woes spell an opportunity to expand and grow. These mercenary entrepreneurs have taken advantage of an era of deregulation to devise high-priced products to sell to the credit-hungry working poor, including the instant tax refund and the payday loan. In the process they've created an industry larger than the casino business and have proved that pawnbrokers and check cashers, if they dream big enough, can grow very rich off those with thin wallets.

Broke, USA is Gary Rivlin's riveting report from the economic fringes. From the annual meeting of the national check cashers association in Las Vegas to a tour of the foreclosure-riddled neighborhoods of Dayton, Ohio, here is a subprime Fast Food Nation featuring an unforgettable cast of characters and memorable scenes. Rivlin profiles players like a former small-town Tennessee debt collector whose business offering cash advances to the working poor has earned him a net worth in the hundreds of millions, and legendary Wall Street dealmaker Sandy Weill, who rode a subprime loan business into control of the nation's largest bank. Rivlin parallels their stories with the tale of those committed souls fighting back against the major corporations, chain franchises, and newly hatched enterprises that fleece the country's hardworking waitresses, warehouse workers, and mall clerks.

Timely, shocking, and powerful, Broke, USA offers a much-needed look at why our country is in a financial mess and gives a voice to the millions of ordinary Americans left devastated in the wake of the economic collapse.