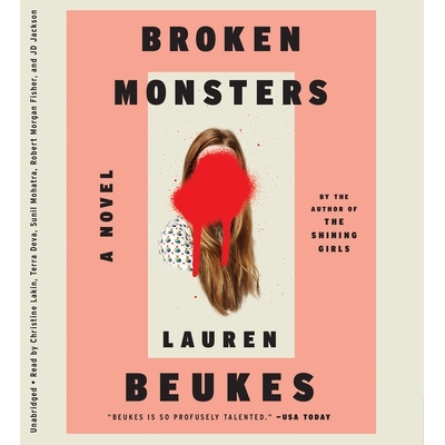 A criminal mastermind creates violent tableaus in abandoned Detroit warehouses in Lauren Beukes's new genre-bending novel of suspense.
Detective Gabriella Versado has seen a lot of bodies. But this one is unique even by Detroit's standards: half boy, half deer, somehow fused together. As stranger and more disturbing bodies are discovered, how can the city hold on to a reality that is already tearing at its seams?
If you're Detective Versado's geeky teenage daughter, Layla, you commence a dangerous flirtation with a potential predator online. If you're desperate freelance journalist Jonno, you do whatever it takes to get the exclusive on a horrific story. If you're Thomas Keen, known on the street as TK, you'll do what you can to keep your homeless family safe--and find the monster who is possessed by the dream of violently remaking the world.
If Lauren Beukes's internationally bestselling The Shining Girls was a time-jumping thrill ride through the past, her Broken Monsters is a genre-redefining thriller about broken cities, broken dreams, and broken people trying to put themselves back together again.

"Broken Monsters is a show-stopping story of a city trying to rise from its own ashes, its inhabitants struggling with their own demons, and monster working to shape the world to match his most disturbing visions. It's beautiful, horrifying, thrilling, and most impressive of all, possessed of a deep and remarkable compassion. I wish I'd written it."—Ivy Pochoda, author of Visitation Street
"With Broken Monsters, the wildly talented Lauren Beukes has created a darkly majestic jewel of a novel, surpassing even The Shining Girls (no mean feat). Part harrowing thriller, part urban-Grimm's fairytale, but always filled with a deeply affecting humanity, Broken Monsters is the kind of book you'll find yourself pressing into the hands of everyone you know so they can experience it too."—Megan Abbott, author of The Fever and Dare Me
PRAISE FOR THE SHINING GIRLS:
"Wildly inventive"—Entertainment Weekly
"Lauren Beukes has got an intriguing style of dealing with slightly surreal things in very real ways. I'm all over it."—Gillian Flynn, O: The Oprah Magazine
PRAISE FOR LAUREN BEUKES:
"A triumph"—Alan Cheuse, National Public Radio
"One of the scariest and best-written thrillers of the year"—Chicago Sun-Times
"Lauren Beukes is so profusely talented--capable of wit, darkness, and emotion on a single page--that a blockbuster seems inevitable."—Charles Finch, USA Today
"Expertly chilling"—San Francisco Chronicle
"Astonishing"—Time