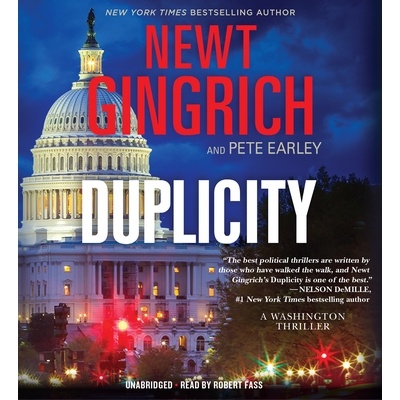 in stock
Duplicity
(Unabridged)
add to wishlist give as a gift Play Sample
The greatest nightmare for the free world today would be a master terrorist hiding somewhere, controlling and coordinating radical Islamic groups at the highest level around the globe. In DUPLICITY, ...
add to cart


The greatest nightmare for the free world today would be a master terrorist hiding somewhere, controlling and coordinating radical Islamic groups at the highest level around the globe.

In DUPLICITY, the newest thriller from former Speaker of the House and bestselling author Newt Gingrich, such an invisible hand overseeing havoc worldwide plays a major role. Gingrich has teamed with former Washington Post reporter and bestselling author Pete Earley to create a highly plausible mix of domestic and global action in this ripped-from-the-headlines thriller.

And of course, it's set during an American presidential election.

When President Sally Allworth decides to reestablish America's Mogadishu embassy in Somalia weeks before Election Day, her challenger says she is playing politics with American lives. That turns out to be true when the embassy is attacked and hostages are taken. Embassy station chief Gunter Conner and Marine captain Brooke Grant end up the unlikely survivors of this Benghazi-style attack. Suddenly, they are the only hope for saving their captured colleagues.

The firestorm of drama is compelling, set off by the intersection of Washington power and politics, a fragile third-world Islamic country, and Somali Americans here at home.

Only Newt Gingrich's unique in-depth knowledge of the political realities of friend and foe could weave such a spellbinding tale of events and personalities, one that could actually happen . . . if America's leaders aren't wary of a world full of DUPLICITY.

A thrilling tale of America's darkest day.—W.E.B. Griffin on Pearl Harbor
An exciting alternative history of the Civil War. Character depictions are vivid, detailed, and insightful. One of the best novels of the Civil War to appear in recent years.—Publishers Weekly (Starred Review) on Grant Comes East
Grim, gritty, realistic, accurate, and splendid, this is a soaring epic of triumph over almost unimaginable odds.—Library Journal on To Try Men's Souls
The authors' research is impeccable...the reader is left believing it could really have happened this way.—Booklist on Never Call Retreat
[Gettysburg] is believable and beautifully written...every bit as good as Michael Sharra's The Killer Angels. Not only do Gingrich and Forstchen bring the characters to life, and often horrible death, but they do so with memorable observations on the ways of war and vivid, technically accurate descriptions of frightful Civil War combat.—The Courier Journal, on Gettysburg