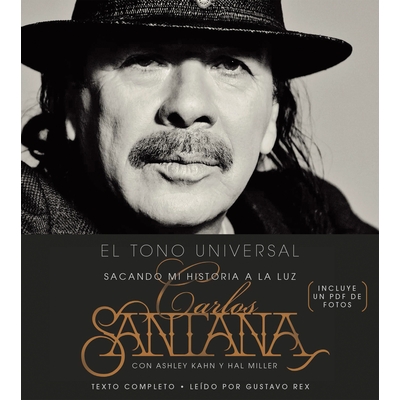 In the realm of guitar gods, Santana stands alone for what's come to be called his "universal tone"-both the fact that you can recognize a Santana song from just one note and the fact that Santana is well known to believe music and soul are interconnected.

In the category of major rock memoirs yet undone, this is at the top-a big autobiography by one of the most mysterious and influential musicians of the last 50 years.

From growing up dirt poor in Mexico and suffering abuse to becoming a lowly dishwasher in the US with a hot guitar hand, to a person whom you might almost think is perpetually in a state of nirvana or at least bliss, this is the story of a fascinating man who brings the ideal combination of storytelling gold and a major marketing machine.

This is one of the most sensory (and sensual) major rock bios you'll ever read. His voice comes through, it's deeply honest and frank, and from imagining the wisps of smoke from a long gone Miles Davis before Carlos's shows to describing the depths of his connection to sound, Santana brings a remarkable book to his huge following this fall.

"One of rock's true virtuosos and guiding lights." -- Rock and Roll Hall of Fame
"A thread runs through his multicultural, crossgenerational music: the unifying power of the human spirit." -- John Roos, Los Angeles Times
"Passion, soul, and that elusive thing called sabor come through the music of Carlos Santana. His is always a surprising sound, ahead of its time -- true world music before the term was even invented, but uniquely American in its multicultural reach....Santana is an artist who transcends musical genres and touches the heart across all generations." -- The Kennedy Center