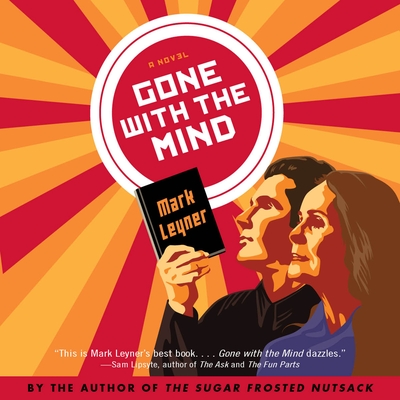 Dizzyingly brilliant, raucously funny, and painfully honest, GONE WITH THE MIND is the story of Mark Leyner's life, told as only Mark Leyner can tell it. In this utterly unconventional novel-or is it a memoir?-Leyner gives a reading in the food court of a New Jersey shopping mall. The "audience" consists of Mark's mother and some stray Panda Express employees, who ask a handful of questions. The action takes place entirely at the food court, but the territory covered in these pages has no bounds.

A joyride of autobiography, cultural critique, DIY philosophy, biopolitics, video games, demagoguery, and the most intimate confessions, GONE WITH THE MIND is both a soulful reckoning with mortality and the tender story of the relationship between a complicated mother and an even more complicated son.

At once nostalgic and acidic, deeply humane and completely surreal, GONE WITH THE MIND is a work of pure, hilarious genius.

"Dazzling, hilarious, heartfelt and entirely-mind-blowingly-original, Mark Leyner's fictional memoir, Gone With The Mind, confirms the author's status as one of the most singular, wild-ass and brilliantly fearless voices in American literature. In prose that is equal parts Roth, Joyce, Scientific American and the Marx Brothers, Gone With The Mind delineates the deep soul and life story of man staring down the barrel of mortality-in the food court of a New Jersey mall. There isn't a convention Mark Leyner does not shatter, nor an aspect of 21st century culture-from robot rape to first person shooter games-he does not reexamine and render fresh. Quite possibly the first literary work of genius-comic and otherwise-of the new millennium."—Jerry Stahl