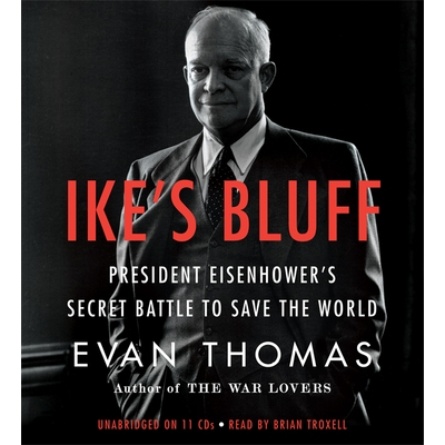 Upon assuming the presidency in 1953, Dwight Eisenhower set about to make good on his campaign promise to end the Korean War. Yet while Eisenhower was quickly viewed by many as a doddering lightweight, behind the bland smile and simple speech was a master tactician. To end the hostilities, Eisenhower would take a colossal risk by bluffing that he might use nuclear weapons against the Communist Chinese, while at the same time restraining his generals and advisors who favored the strikes. Ike's gamble was of such magnitude that there could be but two outcomes: thousands of lives saved, or millions of lives lost.

A tense, vivid and revisionist account of a president who was then, and still is today, underestimated, IKE'S BLUFF is history at its most provocative and thrilling.

"In his absorbing narrative of men who found duty or fulfillment or personal meaning in a war for empire-and of other men, like William James, who feared that such a quest would rot the nation's soul-Thomas has illuminated, in a compulsively readable style, a critical moment in American history. This is a book that, with its style and panache, is hard to forget and hard to put down."—Ronald Steel, New York Times Book Review
Terrific Praise for The War Lovers:

No biographer at work today has a surer feel for the human dimension of history than Evan Thomas...The War Lovers is as good as popular history gets."—Jon Meacham, author of American Lion: Andrew Jackson in the White House
"Thomas takes some risks in his biography of Theodore Roosevelt and his cohorts, trying to get not just inside their actions, but inside their heads. The result is an intriguing examination of the pull that war has on men."—Steve Weinberg, Minneapolis Star Tribune
"Thomas has delivered an innovative, frequently entertaining and valuable retelling of an episode that set the pattern for more than a century of foreign military adventurism. This timely book is a cautionary tale about how the psyche of powerful and ambitious leaders may matter more than fact-or even truth-when the question of war arises."—James McGrath Morris, The Washington Post