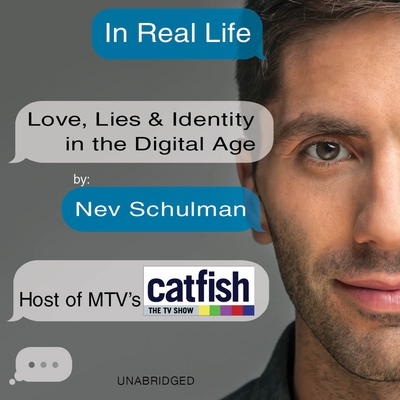 IN REAL LIFE: Love, Lies & Identity in the Digital Age

As the host of the wildly popular TV series Catfish which investigates online relationships to determine whether they are based on truth or fiction (spoiler: it's almost always fiction).

Nev has become the Dr. Drew of online relationships. His clout in this area springs from his own experience with a deceptive online romance, about which he made a critically acclaimed 2010 documentary (also called Catfish). In that film Nev coined the term "catfish" to refer to someone who creates a false online persona to reel someone into a romantic relationship. The meme spread rapidly.

Now Nev brings his expertise to the page, sharing insider secrets about:

Peppered throughout with Nev's personal stories, this book delves deeply into the complexities of online identity. Nev shows us how our digital lives are affecting our real lives, and provides essential advice about how we should all be living and loving in the era of social media.

"What I find most exciting about IN REAL LIFE is how it explores the Internet's impact on our perception of gender and sexuality, and how we portray our digital selves to the world to that end. As a fellow millennial, I'm constantly trying to adapt to how the digital age is molding our ideas of love and relationships. In Real Life does not attempt to define these ever-changing terms but instead works to understand them."—Kim Stolz, author of Unfriending My Ex
"The book is at once a memoir, a meditation on a truly unique phenomenon of the internet age, and a motivational address for anyone seeking virtual companionship. Schulman cautions his readers against lying on their social media profiles, and argues instead for improving "offline" life. "Embrace who you really are, both online and off" is the message at the heart of his book."—Publishers Weekly
"Nev's book begins as a fun journey into the world of lying on the internet, but it extrapolates into the larger phenomenon of avatars -- everybody has one on social networks."—James Franco for Vice magazine
"IN REAL LIFE is so much more than a book about online dating. It's about self-acceptance and being true to yourself in a world where you're influenced by so many people over the internet."—Jonathan Bennett, host of MTV's Copycat
"Finally someone has written a smart and funny guide that helps young people navigate social media without letting it take over their lives."—Maude Apatow, actress and twitter personality
"Nev is a great philosopher of the internet and thereby a critical voice for our generation. Whether or not you're a Catfish fan, In Real Life is a must-read and shows us the opportunities and pitfalls that are part of the digital era. Nev makes it plain and simple: the power of the keyboard is now mightier than the sword."—Matthew Segal, founder of OurTime.org