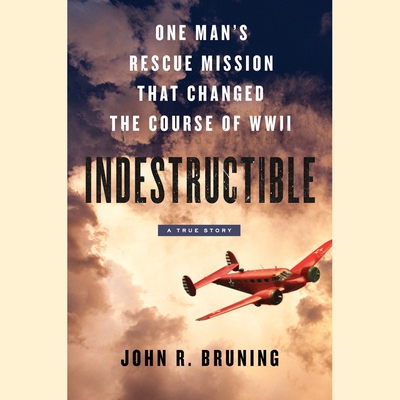 December, 1941: Manila is invaded, and US citizen and Philippines Airlines manager, Pappy Gunn, is ordered to fly key military command out of the country, leaving his family at home. So Gunn was miles away when the Japanese captured his wife and children, placing them in an internment camp where they faced disease, abuse, and starvation.

Gunn spent three years trying to rescue them. His exploits became legend as he revolutionized the art of air warfare, devising his own weaponry, missions, and combat strategies. By the end of the war, Pappy's ingenuity and flair for innovation helped transform MacArthur's air force into the scourge of the Pacific.

"Set against the sprawling and violent Pacific War, Indestructible is the incredible story of one man's courage, tenacity and dogged fight to rescue his family caught behind enemy lines. The book left me with chills."
—James M. Scott, author of Target Tokyo: Jimmy Doolittle and the Raid that Avenged Pearl Harbor

"This thriller-like narrative not only reveals the disturbing plight of courageous American families held in Japanese internment camps, but also delivers a gripping portrait of a uniquely American hero, Pappy Gunn, who fought two wars--one for his country and one to rescue his wife and children."—James Bradley, bestselling author of Flags of Our Fathers, Flyboys, The Imperial Cruise, and The China Mirage
"From the opening pages, Bruning grabs you by the collar and pulls you into the story, not letting go as he masterfully guides you through a part of World War II that is largely unknown. This is the work of a skilled wordsmith who knows how to tell a story."
—Gregory A. Freeman, author of The Forgotten 500
"This is a beautifully told story of a family separated by war, and of an extraordinary father, driven to avenge his family, who by sheer force of character changed the nature of warfare. A superbly told tale of love, honor, courage and devotion."
—Alex Kershaw, author of Avenue of Spies

"Here is a true story with something for everyone. Love, war, treachery, adventure, and above all an intimate portrait of the made-for-Hollywood life of a man who broke all the rules and remade them to his liking. Finally, we have a book that does justice to the legend of Colonel Paul 'Pappy' Gunn, a giant among heroes of World War II. John Bruning shows us a big-hearted man determined to save his family--and a brilliant scientist-pilot who was determined to win the war along the way."
—Adam Makos, author of A Higher Call and Devotion