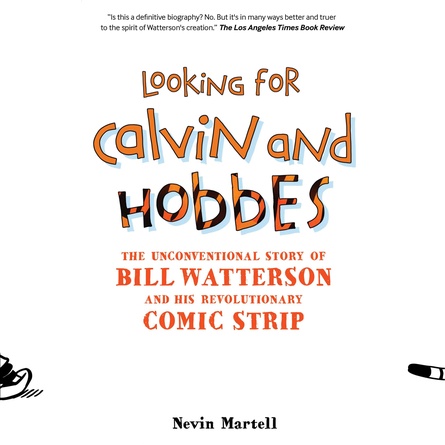 For ten years, Calvin and Hobbes was one the world's most beloved comic strips. And then, on the last day of 1995, the strip ended. Its mercurial and reclusive ...

For ten years, Calvin and Hobbes was one the world's most beloved comic strips. And then, on the last day of 1995, the strip ended. Its mercurial and reclusive creator, Bill Watterson, not only finished the strip but withdrew entirely from public life.

In Looking for Calvin and Hobbes, Nevin Martell sets out on a very personal odyssey to understand the life and career of the intensely private man behind Calvin and Hobbes. Martell talks to a wide range of artists and writers (including Dave Barry, Harvey Pekar, and Brad Bird) as well as some of Watterson's closest friends and professional colleagues, and along the way reflects upon the nature of his own fandom and on the extraordinary legacy that Watterson left behind. This is as close as we're ever likely to get to one of America's most ingenious and intriguing figures - and it's the fascinating story of an intrepid author's search for him, too.

"Martell, who wears his fan heart on his sleeve, travels far and wide to gather pieces of Watterson lore. He interviews former syndicate employees, comic strip artists from the past and present, and some of Watterson's closest confidants. By doing so, Martell walks a fine line between diligent journalist and obsessive fan. But his journey is a reminder that some things can't be recaptured, no matter how much we may wish otherwise."
-The New York Times, "The Moment" blog

"This story of Nevin Martell's search for the elusive Bill Watterson, the J.D. Salinger of the cartoon world, is so richly infused with the spirit of "Calvin and Hobbes," the genuine innocence and affection and humor, it doesn't even matter that the author never meets his subject. Watterson has never allowed the licensing of his work -- no merchandise, no TV, no movies. After doing a few interviews in the 1980s, he wrote a "manifesto against celebrity": "People love to have you, and then they use you up and there's nothing left." Early on, Martell wrote Watterson, who disappeared from public life after he stopped writing the strip in 1995, but never heard back. Discouraged but determined, he researched Watterson's life, interviewed friends, editors, even Watterson's mother, visited Watterson's childhood home in Chagrin Falls, Ohio, talked with other cartoonists, studied the influence of Peanuts, Krazy Kat, Pogo and Winnie the Pooh and pondered the effect of "Calvin and Hobbes" on his own life. Is this a definitive biography? No. But it's in many ways better and truer to the spirit of Watterson's creation."
-The Los Angeles Times Book Review

"This is essential reading for die-hard Calvin and Hobbes fans who want to stalk Watterson. Martell will give you all the reasons why you will never find the man. So instead of attempting something both discourteous and criminal, read this book instead."
-The San Francisco Book Review