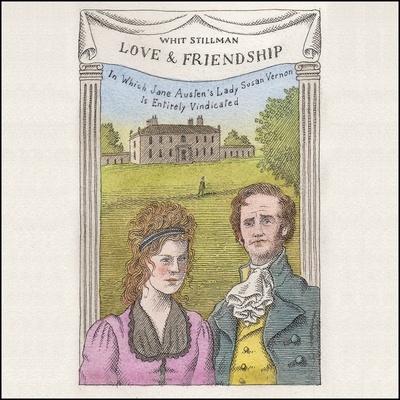 A sharp comedy of manners, and a fiendishly funny treat for Jane Austen and Whit Stillman fans alike
Impossibly beautiful, disarmingly witty, and completely self-absorbed: Meet Lady Susan Vernon, both the heart and the thorn of Love & Friendship. Recently widowed with a daughter who's coming of age as quickly as their funds are dwindling, Lady Susan makes it her mission to find them wealthy husbands--and fast. But when her attempts to secure their futures result only in the wrath of a prominent conquest's wife and the title of 'most accomplished coquette in England', Lady Susan must rethink her strategy. Unannounced, she arrives at her brother-in-law's country estate. Here she intends to take refuge - in no less than luxury, of course - from the colorful rumors trailing her, while finding another avenue to 'I do'. Before the scandalizing gossip can run its course, though, romantic triangles ensue.

PRAISE FOR LOVE & FRIENDSHIP: THE FILM

"Delightfully droll.... Stillman so effortlessly, elegantly bridges the gap between his conniving aristocrats and Austen's that it's difficult to say where one's sensibility ends and the other's begins."--Kyle Smith, New York Post

"Flat-out hilarious -- find me a funnier screen stab at Austen, and I'm tempted to offer your money back personally."--Tim Robey, Telegraph

"In the ever-booming Austen spinoff industry, where paeans to Mr. Darcy are the norm, rewriting a work of the master's in the guise of one of her detractors makes for an eccentrically cheeky tribute."--Alexandra Schwartz, New Yorker

"Both quirky and hilarious."--Publishers Weekly

"[A] delicately sincere inversion of Austen's amused irony.... Stillman's gravity comes from the way he both understands the terrors of social relations--the pursuit of love and friendship--and also admires all strategies in artifice that might soften these terrors, subvert the tyranny of misinterpretation, and restore a version of utopia."--Adam Thirlwell, New York Review of Books

"If you like your Austen subversive, cruel, funny and outrageous, then you will love Stillman's Love & Friendship."--Paula Byrne, The Times (UK)

"One of the classiest book-to-movie novelizations that's ever existed."--Rebecca Pahle, Film Journal International