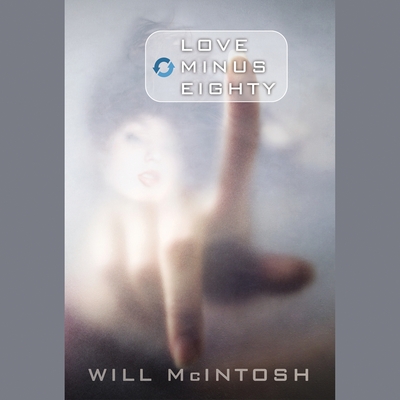 in stock
Love Minus Eighty
(Unabridged)
add to wishlist give as a gift Play Sample
In the future, love is complicated and death is not necessarily the end. Love Minus Eighty follows several interconnected people in a disquieting vision of romantic life in the century ...
add to cart


In the future, love is complicated and death is not necessarily the end. Love Minus Eighty follows several interconnected people in a disquieting vision of romantic life in the century to come.
There's Rob, who accidentally kills a jogger, then sacrifices all to visit her in a cryogenic dating facility, seeking forgiveness but instead falling in love.
Veronika, a shy dating coach, finds herself coaching the very woman who is stealing the man she loves.
And Mira, a gay woman accidentally placed in a heterosexual dating center near its inception, desperately seeks a way to reunite with her frozen partner as the years pass.
In this daring and big-hearted novel based on the Hugo-winning short story, the lovelorn navigate a world in which technology has reached the outer limits of morality and romance.

"A very intense page-turner of a book."—SFCrowsnest
"McIntosh paints an intriguing picture of a society ruled by celebrity culture."—Daily Mail
"McIntosh's latest novel combines sf future tech with horror to craft a story that is both disturbing and hopeful as it questions the value of a life on borrowed time. The dystopic view of the future is both frightening and plausible, while the characters keep the story grounded in the details of human existence."—Library Journal on Love Minus Eighty
"McIntosh manages to show how technology can both divide and unite us while delivering a highly entertaining tale."—RT Book Reviews on Love Minus Eighty
"More people should be reading Will McIntosh."—Tor.com
"A prime example of masterful storytelling--the characters are so well-drawn you feel like they're sitting beside you."—Mur Lafferty, author of The Afterlife Series, onHitchers
"McIntosh manages to show how technology can both divide and unite us while delivering a highly entertaining tale."—RT Book Reviews
"Will McIntosh has created a highly plausible future... a good conceit with a great deal of potential."—SciFi Now
"How do we keep on connecting in our ever-growing maze of social technologies? How can love succeed in the techno-surround we've trapped ourselves in? These are the questions Will McIntosh explores in this tightly plotted tangle of love stories. The stirring result casts a clear and knowing eye on our current society, from the best viewpoint of all: the future."—New York Times bestselling author Kim Stanley Robinson on Love Minus Eighty
"[Love Minus Eighty] manages to deliver a light, romantic story without ever sacrificing its dark vision of the future."—i09
"An intriguing story that explores the meaning of what it is to be dead. Far from the usual 'occult' tale, this original and intelligent work well illustrates the complexity of the human soul."—Pat Whitaker, author of Antithesis and Mindset, onHitchers
"Love Minus Eighty is a book that makes me envious as a writer: a clever premise, brilliantly executed. More importantly, though, it's a book that thrilled and delighted me as a reader, chilling and touching at the same time, a great story that stimulates the mind, the heart and the nerves."—Charles Yu, the author of How to Live Safely in a Science Fictional Universe
"Grimly plausible.. this SF romance is a fine piece of work."—SFX
"Credible, compelling and relentless ... the best and most disturbing moments will stay with the reader for a long time.—Locus, on Soft Apocalypse
"Building his Hugo-winning short story "Bridesicle" into a novel, McIntosh takes a cold-eyed look at relationships in a grim future... Fans of "what if?" SF will enjoy this dystopian tale."—Publishers Weekly on Love Minus Eighty