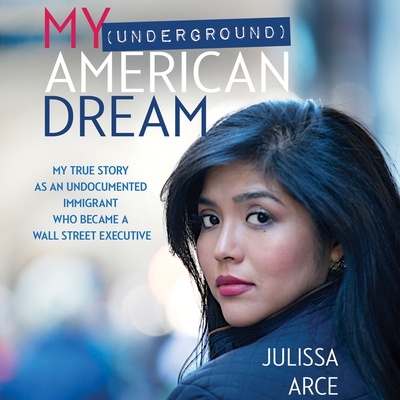 in stock
My (Underground) American Dream
(Unabridged)
add to wishlist give as a gift Play Sample
What does an undocumented immigrant look like? What kind of family must she come from? How could she get into this country? What is the true price she must pay ...
add to cart


What does an undocumented immigrant look like? What kind of family must she come from? How could she get into this country? What is the true price she must pay to remain in the United States?

JULISSA ARCE knows firsthand that the most common, preconceived answers to those questions are sometimes far too simple-and often just plain wrong.

On the surface, Arce's story reads like a how-to manual for achieving the American dream: growing up in an apartment on the outskirts of San Antonio, she worked tirelessly, achieved academic excellence, and landed a coveted job on Wall Street, complete with a six-figure salary. The level of professional and financial success that she achieved was the very definition of the American dream. But in this brave new memoir, Arce digs deep to reveal the physical, financial, and emotional costs of the stunning secret that she, like many other high-achieving, successful individuals in the United States, had been forced to keep not only from her bosses, but even from her closest friends.

From the time she was brought to this country by her hardworking parents as a child, Arce-the scholarship winner, the honors college graduate, the young woman who climbed the ladder to become a vice president at Goldman Sachs-had secretly lived as an undocumented immigrant. In this surprising, at times heart-wrenching, but always inspirational personal story of struggle, grief, and ultimate redemption, Arce takes readers deep into the little-understood world of a generation of undocumented immigrants in the United States today- people who live next door, sit in your classrooms, work in the same office, and may very well be your boss. By opening up about the story of her successes, her heartbreaks, and her long-fought journey to emerge from the shadows and become an American citizen, Arce shows us the true cost of achieving the American dream-from the perspective of a woman who had to scale unseen and unimaginable walls to get there.

There are so many moments in Julissa's journey that numbed my body and transported me fully into her harrowing experience. Her story broke my heart and then made it jump for joy.—America Ferrera, actor, producer
Arce takes us on a breathtaking climb to the highest pinnacles of Wall Street while holding fast to a deep secret. The path to her success at Goldman Sachs is certainly inspiring. But it is the telling of her story with humor, grace and insight that is the real achievement.—Lisa Endlich, author of New York Times bestseller Goldman Sachs: The Culture of Success
A heart-rendering testament to the resiliency and determination of one woman who dared to dream. It crosses borders - literally and metaphorically.—Turney Duff, New York Times bestselling author of The Buy Side
Julissa Arce's story is a must read. The twist and turns of her life keep you on the edge of your seat . She lives with a secret that could destroy her life every day, while rising through the ranks of Wall Street. You will cry and you will be inspired with the will of a woman who embodies the real American Dream.—Galan Nely, Entrepreneur and Producer
A great, bright explosion of a book. A 21st-century David Copperfield with its utterly lovable, wildly imperfect heroine; a plot packed with incident; a few villains and many, many heroes. There are as many miracles as disasters, and no place to catch your breath. The reader will cheer and then be sad-and will learn much about the lives of young immigrants in America.—Donald E. Graham, Former Chairman and Publisher of The Washington Post