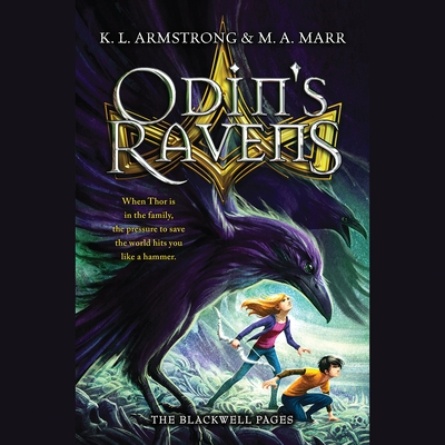 When thirteen-year-olds Matt Thorsen and Fen and Laurie Brekke, modern-day descendants of Thor and Loki, discovered they were fated to take the places of the Norse gods in an epic battle against the apocalypse, they thought they knew how things would play out. Gather the descendants standing in for the gods, defeat a giant serpent, and save the world. No problem, right?

But the descendants' journey grinds to a halt when their friend and descendant Baldwin is poisoned and killed and Matt, Fen, and Laurie must travel to the Underworld in the hopes of saving him. That's only their first stop on their journey to reunite the challengers, find Thor's hammer, and save humanity--a journey filled with enough tooth-and-nail battles and colossal monsters to make Matt and his friends a legend in their own right.

Perfect for fans of ancient myths and filled with young heroes, monstrous beasts, and godly enemies, this fast-paced adventure is impossible to put down.

"This sequel to Loki's Wolves (2013) delivers plenty of action...offering moments of humor even as it delivers exciting scenes of quest, combat, and adventure. Narrative shifts from one teen hero to another add further dimension to the story...Keep this series in mind for Percy Jackson fans in search of fresh reading material."—Booklist
"Fierce adventure, lightening pace, furious action, and original, engaging characters. I was hooked from the first hammer swing."—Eoin Colfer, New York Times bestselling author of Artemis Fowl
"Loki's Wolves brings Norse mythology to the modern world...The background and explanation of the legends are clear and a natural fit to the story and dialogue, bringing life to lesser-known Norse mythology...Recommended for those who enjoyed Rick Riordan's 'Percy Jackson and the Olympians' series."—School Library Journal
"These authors are no strangers to weaving a compelling tale. Once the story moves past the background, the plot picks up quickly and the adventure doesn't disappoint."—Library Media Conenction
"This rousing, fast-paced adventure, first in the Blackwell Pages trilogy, will please readers who loved John Stephens's Books of Beginning and Rick Riordan's modern-day twists on ancient myth."—Publishers Weekly
"This smart, fast-paced, action-packed novel...offers readers a solid adventure story that still manages not to skimp on character...An excellent what-to-read-next for Percy Jackson fans, this novel will also please young readers of Marvel's Thor and myth-lovers already familiar with Norse lore..."—Bulletin of the Center for Children's Books
Praise for Loki's Wolves:"Norse mythology brought to life with engaging contemporary characters and future volumes that promise explosive action; ideal for Percy Jackson fans who want to branch out."—Kirkus Reviews
"Loki's Wolves has everything--a fast-paced, exciting plot, endearing and honest characters, Norse mythology with a contemporary twist, and plenty of heart. I can't wait to find out what happens to Matt, Laurie, and Fen!"—Ally Condie, author of the #1 New York Times bestseller Matched
Praise for Odin's Ravens:"This sequel stands by itself, as essential details of the first are neatly woven throughout. Intense action, well-crafted scenes and humor-laced dialogue add up to a sure winner...What Riordan has done for Greek and Egyptian mythology, Armstrong and Marr are doing for Norse myths...A Hel of a good read."
—Kirkus Reviews