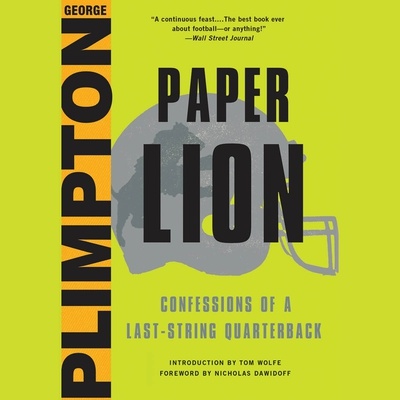 George Plimpton was perhaps best known for PAPER LION, the book that set the bar for participatory sports journalism. With his characteristic wit, Plimpton recounts his experiences in talking his way into training camp with the Detroit Lions, practicing with the team, and taking snaps behind center. His breezy style captures the pressures and tensions rookies confront, the hijinks that pervade when sixty high-strung guys live together in close quarters, and a host of football rites and rituals.

One of the funniest and most insightful books ever written on football, PAPER LION is a classic look at the gridiron game and a book The Wall Street Journal calls "a continuous feast...The best book ever about football--or anything!"

"A continuous feast...The best book ever about football--or anything!"—Wall Street Journal
"A great book that makes football absolutely fascinating to fan and non-fan alike...a tale to gladden the envious heart of every weekend athlete.... Plimpton has endless curiosity, unshakable enthusiasm and nerve, and a deep respect for the world he enters."—New York Times
"A delight--more entertaining, if possible, than I remembered... the reader leaves George Plimpton's wide world of sports with deep reluctance.... His prose is as elegant and seemingly effortless as Ted Williams's swing or an Arnold Palmer iron shot.... His teammates recede--like the old baseball players vanishing into the cornfield in Field of Dreams, taking their magical world with them but living on in fond memory."—Edward Kosner, Wall Street Journal
"The agility and imaginativeness of his prose transforms his account of this daydream into a classic of sports reporting."—The New Yorker
"Possibly the most arresting and delightful narrative in all of sports literature."—Book Week