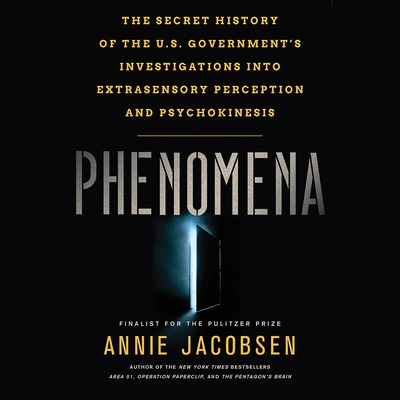 For more than forty years, the U.S. government has researched extrasensory perception, using it in attempts to locate hostages, fugitives, secret bases, and downed fighter jets, to divine other nations' secrets, and even to predict future threats to national security. The intelligence agencies and military services involved include CIA, DIA, NSA, DEA, the Navy, Air Force, and Army-and even the Joint Chiefs of Staff.

Now, for the first time, New York Times bestselling author Annie Jacobsen tells the story of these radical, controversial programs, using never before seen declassified documents as well as exclusive interviews with, and unprecedented access to, more than fifty of the individuals involved. Speaking on the record, many for the first time, are former CIA and Defense Department scientists, analysts, and program managers, as well as the government psychics themselves.

Who did the U.S. government hire for these top secret programs, and how do they explain their military and intelligence work? How do scientists approach such enigmatic subject matter? What interested the government in these supposed powers and does the research continue? Phenomena is a riveting investigation into how far governments will go in the name of national security.

"As comprehensive as it is critical, this latest expose from Jacobsen is perhaps her most important work to date.... Jacobsen persuasively shows that it in fact happened and aptly frames the dilemma.... Rife with hypocrisy, lies, and deceit, Jacobsen's story explores a conveniently overlooked bit of history."—Publishers Weekly (starred)
Praise for Phenomena

One of the most anticipated books of 2017-- The Washington Post


"With Phenomena, Annie Jacobsen has once again produced an utterly absorbing and brilliantly reported chronicle that truly breaks new ground. This is a boundary-breaking story of mental phenomena-extra sensory perception techniques-that is truly a pleasure to read. A mind-bending triumph!"—Alex Kershaw, bestselling author of The Liberator and Avenue of Spies
"Chilling, compelling, and comprehensive accounting.... Jacobsen's impressive book plumbs the dark depths of this postwar recruiting and shows the historical truths behind the space race and postwar US dominance. Highly recommended for readers in World War II history, espionage, government cover-ups, or the Cold War."—Library Journal (starred)
"Filled with the intrigue and high stakes of a spy novel, Jacobsen's history of DARPA is as much a fascinating testament to human ingenuity as it is a paean to endless industrial warfare and the bureaucracy of the military-industrial complex."—Kirkus Reviews
Praise for The Pentagon's Brain

"Annie Jacobsen's considerable talents as an investigative journalist prove indispensable in uncovering the remarkable history of one of America's most powerful and clandestine military research agencies. And she is a great storyteller, making the tantalizing tale of The Pentagon's Brain -- from the depths of the Cold War to present day -- come alive on every page."—Gerald Posner, author of God's Bankers
"A fascinating and unsettling portrait of the secretive U.S. government agency....Jacobsen walks a fine line in telling the story of the agency and its innovations without coming across as a cheerleader or a critic, or letting the narrative devolve into a salacious tell-all. Jacobsen's ability to objectively tell the story of DARPA, not to mention its murky past, is truly remarkable, making for a terrifically well-crafted treatise on the agency most Americans know next to nothing about."
—Publishers Weekly (starred review)
"With Annie Jacobsen's OPERATION PAPERCLIP for the first time the enormity of the effort has been laid bare. The result is a book that is at once chilling and riveting, and one that raises substantial and difficult questions about national honor and security...This book is a remarkable achievement of investigative reporting and historical writing."—Boston Globe
"Important, superbly written.... Jacobsen's book allows us to explore these questions with the ultimate tool: hard evidence. She confronts us with the full extent of Paperclip's deal with the devil, and it's difficult to look away."—Matt Damsker, USA Today (4 stars)
Praise for Operation Paperclip

"The most in depth account yet of the lives of Paperclip recruits and their American counterparts.... Jacobsen deftly untangles the myriad German and American agencies and personnel involved...more gripping and skillfully rendered are the stories of American and British officials who scoured defeated Germany for Nazi scientists and their research."—New York Times Book Review