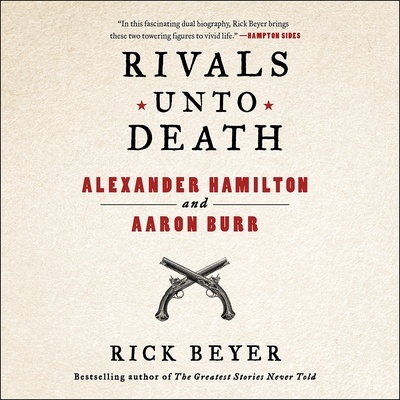 The day was hot and sticky. The man in the rowboat was an impetuous hothead. His row across the choppy Hudson that morning led to a confrontation that has burned bright in the American mind for more than two hundred years.

When the most notorious duel in American history took place, Alexander Hamilton was 49, a former Treasury Secretary whose meteoric political rise had flamed out in the wake of a humiliating sex scandal. Vice President Aaron Burr, was just a year younger than Hamilton, at the top of a meteoric rise of his own in the nation's fledgling government.

Rivals Unto Death explores the largely unknown three-decade dance that led to the infamous duel. It traces the rivalry back to the earliest days of the American Revolution, when both men, brilliant, restless, and barely twenty years old, elbowed their way onto the staff of General George Washington; follows them as they launch their competitive legal practices in New York City and through the insanity of the election of 1800 when Hamilton threw his support behind Thomas Jefferson in an effort to knock Burr out of the running for president; and takes them finally to the dueling grounds that only one would emerge from.