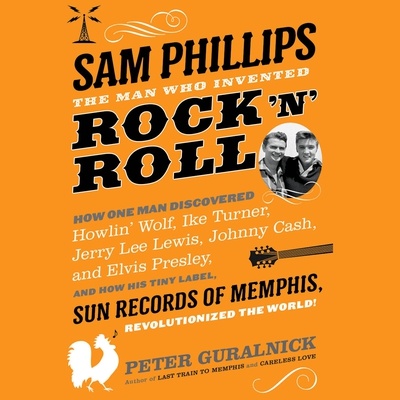 One of The Washington Post's Notable Nonfiction Books of 2015

"Mr. Guralnick is a sensitive biographer who has landed upon a perfect topic in Phillips, the brilliant Memphis producer who, in the 1950s, recorded the earliest work of Elvis Presley, Johnny Cash, Jerry Lee Lewis and Howlin' Wolf. This is vital American history, smartly and warmly told."—Dwight Garner, New York Times, Top Books of 2015
"When Elvis Presley stepped into a Memphis recording studio with producer Sam Phillips in 1954, they defined rock 'n' roll as we know it. Peter Guralnick already gave us Elvis's story in two landmark books. He now returns with a brilliant, intensely human look at Phillips, the endlessly fascinating figure who also recorded Johnny Cash, B.B King, Howlin' Wolf, and Jerry Lee Lewis. It's a bold, insightful work that tells us in novelistic detail about the obsessions and struggles of the man who presided over the uneasy birth of rock 'n' roll."—Robert Hilburn, author of Johnny Cash
"Epic, elegant and crisply told."—Henry L. Carrigan, Jr., BookPage
"Guralnick paints a detailed and sympathetic picture of Phillips as a relentless visionary,a talker, a loving but imperfect family man and a perfectionist who relished imperfections that could make recordings special."—Michael Hill, Associated Press
" A deeply intimate portrait that never veers into hagiography....For Guralnick and for the reader, the book becomes the quintessential Phillips production: an altogether profound and revelatory experience."—Memphis Commercial Appeal
"Lovingly crafted.... With crisp prose and meticulous detail, Guralnick gives Phillips the same epic treatment he previously employed in acclaimed biographies of Sam Cooke and Elvis Presley.... An astonishing feat.... It is difficult to imagine a more complete or poetic account of his life than this remarkable volume.... 'I didn't set out to revolutionize the world,' Phillips once told Guralnick in a moment of humility, but in this book [the author] convincingly argues that Phillips did just that."—Charles Hughes, The Washington Post
"Much-anticipated and long-awaited, Sam Phillips: The Man Who Invented Rock 'n' Roll, is as much a labor of love for Peter Guralnick as Sun Records was to Sam Phillips. And that's saying something."—Trevor Cajiao, Now Dig This
"Essential reading."—Isabella Biedenharn, Entertainment Weekly
"Just as the two magisterial volumes of Guralnick's Presley bio paint a much more nuanced picture of Presley, The Man Who Invented Rock 'n' Roll captures the complexity of the colorful Phillips....The author loves his subject and loves writing about him.... A book that can stand with his best, and that is [both] entertaining and lively....For that rock-and-roll fans should be eternally grateful."—Dan DeLuca, Philadelphia Inquirer
"Sam Phillips is an epic biography, at once sweeping and personal, in which the gifted writer Peter Guralnick captures the voice and life of a transformational figure in American music."—Jess Walter, author of Beautiful Ruins
"Few biographies have anything like this degree of insight, rigor, or command of detail; crucially, it also drives you back to the music. Written with sensitivity and love, it captures more than any other book this writer can remember the Fifties' limitless possibilities, and is a gripping depiction of an empire in its pomp--not only Sun Records, but also America."—Paul Trynka, Mojo
"Thoroughgoing and thoroughly satisfying.... Guralnick has injected enough helium and momentum into the material to get it airborne and moving stately forward."—Peter Lewis, Christian Science Monitor
" With this book, Peter Guralnick brings popular music and the man who gave us so much of it, Sam Phillips, to the very centre of American social history. And he does it quite brilliantly."—Roddy Doyle, author of The Commitments
"Guralnick's biography of Sam Phillips is a key work of Americana."—Downbeat
"Sam Phillips is Guralnick's most personal book....The author injects himself into the book more than ever before--not only because he's part of the story in the later years but also because Phillips' credo of breaking down of class and race barriers through the 'extreme individualism' is so essential to Guralnick's life work--and his conception of American music. You can hear Phillips' evangelical fervor resonating in Guralnick's prose much as you could once hear it reverberating in Presley's vocals."—Geoffrey Himes, Paste
"Phillips' rich and oracular storytelling permeates this book....He was huckster, trickster, dreamer and architect compressed in one roiling, flamboyant package. If he hadn't existed, it would have been necessary for Mark Twain to invent him."—Gene Seymour, Newsday
"The book is a labor of love. Guralnick is passionate about the music, but he doesn't let his passion overinflate his prose, and he seems to know everything about everyone who was part of the Southern music world... It's natural for us to take events that were to a significant extent the product of guesswork, accident, short-term opportunism and good luck...and shape them into a heroic narrative....But a legend is just one of the forms that history takes -- which is why it's good to have Guralnick's book."—Louis Menand, The New Yorker
"Definitive...With Presley's story at its core, Sam Phillips: The Man Who Invented Rock 'n' Roll is in some ways the third volume [to] Guralnick's double-volume Elvis bio. What makes it more illuminating and arguably truer is seeing Elvis in the broader context of Phillips' career, [which was] in many ways a mission to transform [t]his nation's history of bigotry....You may come away born again."—Rolling Stone
"Mr. Guralnick has conjured the magic of Elvis in the Sun studio as Presley's biographer, but his knowing Sam Phillips makes this the superior version... Mr. Guralnick takes you right to the room, and rather than gliding past a scene that has been written about many times, he immerses himself comfortably in it and revives its original intensity....[He] has produced the gold-standard Presley bio and now a complete portrait of his inspiration. Mr. Guralnick, the historian, writer and fan, has captured what was different, real and raw about a great artist."—Preston Lauterbach, Wall Street Journal
"A cornerstone addition to Guralnick's unmatched backlist of music history and biography."—Shelf Awareness