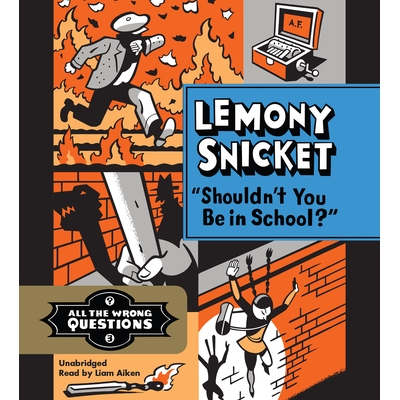 Praise for All the Wrong Questions:"A Pink Panther-esque page turner...exceptionally literary and entirely singular. Characterized by linguistic playfulness and an appreciation for the archaic, "Who Could That Be at This Hour?" is frequently laugh-out-loud hilarious...illustrations by celebrated cartoonist Seth only add to the throwback gumshoe vibe of this outrageous, long-overdue, middle-grade follow-up series from a truly beloved narrator."—Los Angeles Times
* "Full of Snicket's characteristic wit and word play . . . this book belongs in all collections."—VOYA, starred review
* "Will thrill fans of the author's earlier works and have even reluctant readers turning pages with the fervor of seasoned bookworms. A must-have."—School Library Journal, starred review
"There's no stopping Snicket!"—Booklist
* "Full of Snicket's trademark droll humor and maddeningly open-ended, this will have readers clamoring for volume two."—Publishers Weekly, starred review
"The sort of goodie savored by brainy kids who love wordplay, puzzles and plots that zing from point A to B by way of the whole alphabet."—The Washington Post
"Demands to be read twice: once for the laughs and the second time for the clues."—The Boston Globe
* "[With] gothic wackiness, linguistic play and literary allusions....Fans of the Series of Unfortunate Events will be in heaven picking out tidbit references to the tridecalogy, but readers who've yet to delve into that well of sadness will have no problem enjoying this weird and witty yarn."—Kirkus Reviews, starred review