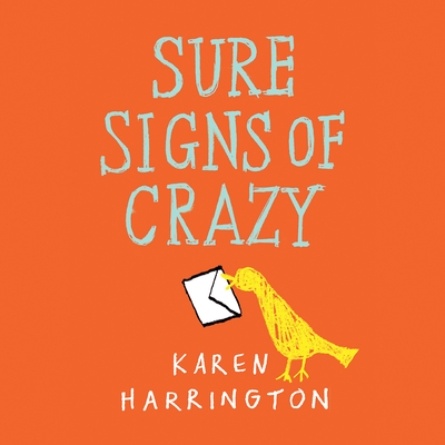 * "Readers intrigued by the premise of this moving story will sympathize with the plucky protagonist and rejoice in the way her summer works out."—Kirkus, starred review
"Sarah Nelson lives between a terrible tragedy in the past and a terrible fear about what might happen in the future. In that uncertainty, Sarah faces her life squarely, with a heroism that makes us cheer for humanity's courage, wit, and guts. She faces a divided friendship, the death of a neighbor, the loss of her first love, the near loss of her father, and, most poignantly, the knowledge that her lost mother will never be found--and yet hers is a compelling journey that takes us into that most fragile place: Hope. You will be glad you journeyed there with her."—Gary D. Schmidt, Newbery Honor author of The Wednesday Wars and Okay for Now
"Extraordinary heart."—The Horn Book
"Sure Signs of Crazy is knowing, hilarious, and tender. Karen Harrington's character portrait of Sarah Nelson is one for the ages."—Pat Conroy, bestselling author of The Prince of Tides and My Reading Life
* "[A] beautifully written story...This is the kind of book that stays with you."—Library Media Connection, starred review
"An engaging, warm-hearted story. Beautifully written. Harrington creates a fearless and resilient heroine."—Jewell Parker Rhodes, Coretta Scott King Honor author of Ninth Ward and Sugar
* "Sarah is an introspective protagonist whose narrative, interspersed with letters and word definitions, keeps readers absorbed...Secondary characters add interest and texture to this compelling novel."—SLJ, starred review
* "Don't think this will be a hard sell to readers...for Harrington has created a protagonist who is, in her own way, as clear-eyed, tough-minded, and inspiring as any dystopian hero."—Booklist, starred review