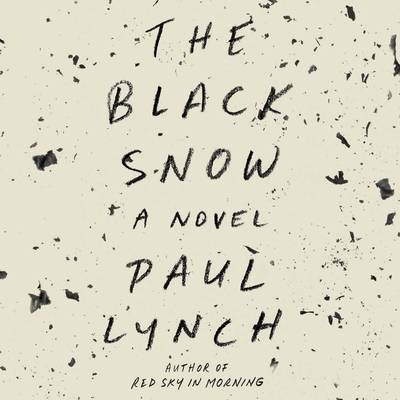 In Donegal in the spring of 1945, a farmhand runs into a burning barn and does not come out alive. The farm's owner, Barnabas Kane, can only look on as his friend dies and all 43 of his cattle are destroyed in the blaze.

Following the disaster, the bull-headed and proudly self-sufficient Barnabas is forced to reach out to the community for assistance. But resentment simmers over the farmhand's death, and Barnabas and his family begin to believe their efforts at recovery are being sabotaged.

Barnabas is determined to hold firm. Yet his teenage son struggles under the weight of a terrible secret, and his wife is suffocated by the uncertainty surrounding their future. As Barnabas fights ever harder for what is rightfully his, his loved ones are drawn ever closer to a fate that should never have been theirs.

In The Black Snow, Paul Lynch takes the pastoral novel and--with the calmest of hands---tears it apart. With beautiful, haunting prose, Lynch illuminates what it means to live through crisis, and puts to the test our deepest certainties about humankind.

PRAISE FOR RED SKY IN MORNING:
"Paul Lynch has a sensational gift for a sentence, inherited from the likes of Cormac McCarthy, Sebastian Barry and Daniel Woodrell. He is a writer to watch out for, staking a bid for a territory all his own."—Colum McCann
"Lynch establishes himself as one of his generation's very finest novelists. The Black Snow is a dark, mesmerizing study in obsession, despair, and secrets too long held."
--Ron Rash, author of The Cove
"A novel in which sentence after sentence comes so beautifully alive in all the fullness of its diction and meaning that most other contemporary Irish fiction looks sheepish by comparison. Lynch's language is rough-hewn and yet beautifully lyrical....I could scarcely read more than a few pages at a time without having to stop and contemplate quitting the writing of fiction myself."
—Alan Cheuse, NPR
"The Black Snow is a staggeringly beautiful book. Immensely powerful, but subtly so. I was mesmerized by it. I read it in one go, but I'll go back to it for sure."
--Kevin Powers, author of The Yellow Birds and Letter Composed During a Lull in the Fighting
"A stunning tale of retribution and disintegration.... at once so starkly brutal and so beautiful that it is impossible to look away."
-Booklist
"Lynch's beautifully intertwined emotional and physical landscapes have a timelessness.... The story gathers momentum scene by scene."
--Publishers Weekly
"A brilliant, hypnotic book. You will lose yourself in the sounds and rhythms-Lynch makes the page sing like the old masters."
--Philipp Meyer, author of The Son
"Some of the most beautiful writing I have ever read. Vivid, unsettling and intensely enjoyable."—Donal Ryan, Booker-nominated author of The Spinning Heart
"A haunting novel from a writer with a gift for language and character.... Lynch has a Seamus Heaney ear for the sights and sounds of rural life." --Kirkus Reviews