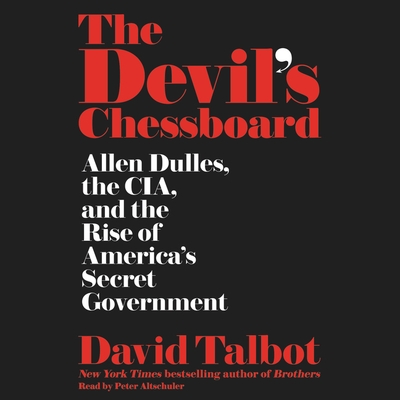 An explosive, headline-making portrait of Allen Dulles, the man who transformed the CIA into the most powerful—and secretive—colossus in Washington, from the founder of Salon.com and author of the New ...

An explosive, headline-making portrait of Allen Dulles, the man who transformed the CIA into the most powerful—and secretive—colossus in Washington, from the founder of Salon.com and author of the New York Times bestseller Brothers.

America’s greatest untold story: the United States’ rise to world dominance under the guile of Allen Welsh Dulles, the longest-serving director of the CIA. Drawing on revelatory new materials—including newly discovered U.S. government documents, U.S. and European intelligence sources, the personal correspondence and journals of Allen Dulles’s wife and mistress, and exclusive interviews with the children of prominent CIA officials—Talbot reveals the underside of one of America’s most powerful and influential figures.

Dulles’s decade as the director of the CIA—which he used to further his public and private agendas—were dark times in American politics. Calling himself “the secretary of state of unfriendly countries,” Dulles saw himself as above the elected law, manipulating and subverting American presidents in the pursuit of his personal interests and those of the wealthy elite he counted as his friends and clients—colluding with Nazi-controlled cartels, German war criminals, and Mafiosi in the process. Targeting foreign leaders for assassination and overthrowing nationalist governments not in line with his political aims, Dulles employed those same tactics to further his goals at home, Talbot charges, offering shocking new evidence in the assassination of President John F. Kennedy.

An exposé of American power that is as disturbing as it is timely, The Devil’s Chessboard is a provocative and gripping story of the rise of the national security state—and the battle for America’s soul.