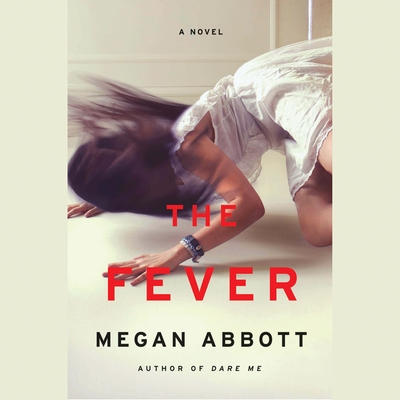 The Nash family is close-knit. Tom is a popular teacher, father of two teens: Eli, a hockey star and girl magnet, and his sister Deenie, a diligent student. Their seeming stability, however, is thrown into chaos when Deenie's best friend is struck by a terrifying, unexplained seizure in class. Rumors of a hazardous outbreak spread through the family, school and community.

As hysteria and contagion swell, a series of tightly held secrets emerges, threatening to unravel friendships, families and the town's fragile idea of security.

A chilling story about guilt, family secrets and the lethal power of desire, THE FEVER affirms Megan Abbott's reputation as "one of the most exciting and original voices of her generation."*

"Once again, Abbott makes an unforgettable inquiry into the emotional lives of young people, this time balanced with parents' own fears and failings. It's also a powerful portrait of community, with interesting echoes of The Crucible: it's the twenty-first century, and, in many ways, we're still frightened villagers, terrified of the unknown. Abbott may be on her way to becoming a major writer."—Booklist (Starred Review)
"The Fever is a potboiler in the truest, best sense of that devalued word: Its ingredients are expertly combined, patiently agitated, and heated to an inexorable boil. But it's also a great novel, full stop, without any of the usual genre caveats, and I can think of no higher recommendation than that you'll want to read it twice: First insatiably, speeding through to find out just what's going to happen, and then again slowly, to savor the sharp, dare I say literary, insights about her characters that Abbott effortlessly scatters throughout."—Adam Sternbergh, Slate
"If the phenomena that led to the Salem Witch trials were to revisit the world today, it might very well look like the scenario in Megan Abbott's engrossing, disturbing, panic attack of a novel, The Fever. In a time when suicide and pregnancy pacts can go viral, this story of mass hysteria in a high school is not only completely plausible -- it's impossible to put down."—Jodi Picoult, New York Times bestselling author of The Storyteller
"Like her stunning 2012 book, Dare Me, Abbott's new novel focuses on teenage girls and the damage they can do. . . . In spare, ferocious language, Abbott captures their energy. . . The beauty of Abbott's writing, and the skilled way she weaves the men's lesser narratives into Deenie's story, make this a standout in contemporary crime fiction. Megan Abbott knows what girls are made of."—The Boston Globe
"Stunning....Nothing should be taken at face value in this jealousy-and hormone-soaked world except that Abbott is certainly our very best guide."— Kirkus (Starred Review)
"The sinuous, liquid prose is evocative and startling, and Abbott's ability to delve into teenagers' psyches is true and clear."— Library Journal
"Abbott is able to render the texture, ambivalence, and confusion of the inner life of a teen, coupling it with sparse, plain dialogue that highlights the disjunction between the way a teen experiences the world and how he or she can actually articulate that experience. And the plot! It's like a riptide! I was hooked by Page 4. Seriously, Page 4 - the end of the first, highly ambiguous, totally tantalizing mini-chapter that begins the book. I knew, four pages in, that I was ruined for the rest of the day . . . It was delicious."— BuzzFeed
"a chilling new novel set in the emotional world of teenagers...In many ways, the message of THE FEVER is about how these things--ambivalence about sex, insecurities about their appearance and navigating the intensity of female friendships--affect the girls and their families, and how a traumatized community stumbles through a crisis."— Elizabeth Blair, NPR
"Megan Abbott, an Edgar-winning crime writer, drew inspiration from Lord of the Flies for her sexy and sinister new novel, Dare Me, which lays bare the cruel, confused longings of a group of high-school cheerleaders, and is the perfect way to forget yourself on a turbulent transatlantic flight."—Maud Newton, New York Times Magazine
PRAISE FOR DARE ME:

"Lord of the Flies set in a high-school cheerleading squad...Tense, dark, and beautifully written."—Gillian Flynn, author of Gone Girl
"Megan Abbott has been called the Queen of Noir...Her new novel, Dare Me, is something of a switch for Abbott in that it's about a cheerleading squad, though - trust us - it's still quite hard-boiled...A contemporary novel about a cheerleading squad that somehow manages to be as dark and sinister as any of Abbott's fiction."—Sherryl Connely, New York Daily News
"[Megan Abbott is] a unique talent with a signature style that gets stronger with every book. With its confident plotting and lyrical prose, The Fever may be her best novel yet."—Los Angeles Times
"No one understands the social dynamics of teenage girls better than Megan Abbott...settling into The Fever, one realizes that Abbott is setting a rhythm, one that's measured and paced with the brilliance of one of the best living mystery writers."—Kevin Nguyen, Grantland
"Abbott grounds the story in unsettling realism-the characters sound and act like real adolescents with real problems."— Entertainment Weekly
"With The Fever, Megan Abbott has created a mesmerizing, modern portrait of teenage life today: Brutal crushes, competing allegiances and first-bloom sensuality, all magnified by the rush and crush of technology. The Fever holds true to its title: It's dark, disturbing, strangely beautiful and utterly unshakeable."—Gillian Flynn, author of Gone Girl
"The Fever sends chills. Megan Abbott's 'high school noir' is sensual and sinister...atmospheric and compelling...What sets Abbott apart from other mystery scribes is her evocative language. There is drama and a fast-moving narrative, but she skillfully weaves a mounting dread into the novel, as well as a claustrophobic sensuality. You feel as if you're in the heads of each of the teenagers in the fictional town of Dryden, but also privy to the inner life of the adults, as well."— The Detroit News
"Make no mistake, this is no pulpy teenage tale: It's a very grown-up look at youth culture and how bad behavior can sometimes be redeemed by a couple of good decisions."—Sara Nelson, O, the Oprah Magazine
"A heady tale of high-school drama with grown-up stakes...Abbott's rendering of the power-plays, rites of bonding and twisted loyalties of teenage girls is pitch-perfect. As much as Dare Me is page-turning murder mystery, it is also an ode to the dark side of girlhood friendship and all its twisted loyalties."—Mythili Rao, The Daily Beast
"The book to beat...in the 'Is it the next Gone Girl?' sweepstakes.... [Megan Abbot has] exceptional gifts for making nerves jangle and skin crawl.... It's the book's constant throb of horror that keeps it gripping."—Janet Maslin, The New York Times
"This smart thriller about the dynamics of panic keeps you guessing till the last scene."— Good Housekeeping
"Megan Abbott has cornered the 'dark desires of teenage girls' territory too, with Dare Me."—Sarah Weinman, Salon
"[Abbott] is a skilled storyteller, and The Fever is a gripping and unsettling novel."—Hannah Tennant-Moore, The New York Times Book Review
"A hypnotic combination of Stephen King at his most suburban and Judy Blume at her most terrifying."— The Austin American Statesman
"Dare Me hurtles past the glitter and angst of high-school cheerleading, right to the bruising inner struggles of adolescence."—New York Magazine