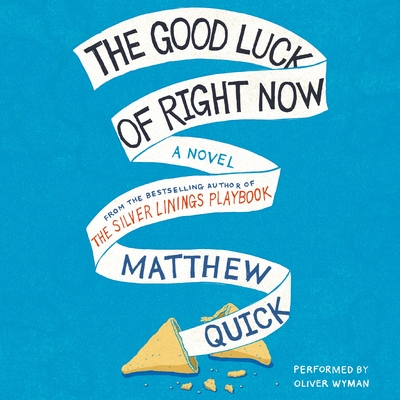 Call it fate
Call it synchronicity
Call it an act of God
Call it . . . The Good Luck of Right Now

For thirty-eight years, Bartholomew Neil has lived with ...

Call it fate
Call it synchronicity
Call it an act of God
Call it . . . The Good Luck of Right Now

For thirty-eight years, Bartholomew Neil has lived with his mother. When she gets sick and dies, he has no idea how to be on his own. His redheaded grief counselor, Wendy, says he needs to find his flock and leave the nest. But how does a man whose whole life has been grounded in his mom, Saturday Mass, and the library learn how to fly?

Bartholomew thinks he's found a clue when he discovers a "Free Tibet" letter from Richard Gere hidden in his mother's underwear drawer. In her final days, Mom called him Richard—there must be a cosmic connection. Believing that the actor is meant to help him, Bartholomew awkwardly starts his new life by writing Richard Gere a series of letters. Jung and the Dalai Lama, philosophy and faith, alien abduction and cat telepathy, the Catholic Church and the mystery of women, are all explored in his soul-baring epistles. But mostly the letters reveal one man's heartbreakingly earnest attempt to assemble a family of his own.

A struggling priest, a "Girlbrarian," her feline-loving, foulmouthed brother, and the spirit of Richard Gere join the quest to help Bartholomew. In a rented Ford Focus, they travel to Canada to see the Cat Parliament and find Bartholomew's biological father . . . and discover so much more.