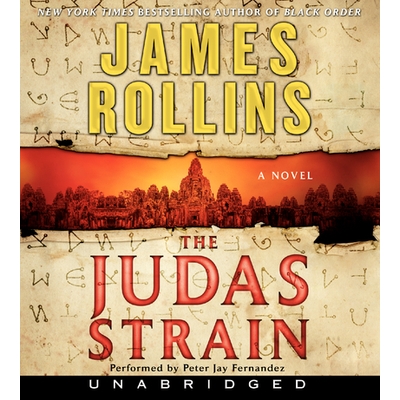 ju·das strain, n. A scientific term for an organism that drives an entire species to extinction

ju·das strain, n. A scientific term for an organism that drives an entire species to extinction

New York Times bestselling author James Rollins returns with a terrifying story of an ancient menace reborn to plague the modern world . . . and of an impossible hope that lies hidden in the most shocking place imaginable: within the language of angels.

From the depths of the Indian Ocean, a horrific plague has arisen to devastate humankind—a disease that's unknown, unstoppable . . . and deadly. But it is merely a harbinger of the doom that is to follow. Aboard a cruise liner transformed into a makeshift hospital, Dr. Lisa Cummings and Monk Kokkalis—operatives of SIGMA Force—search for answers to the bizarre affliction. But there are others with far less altruistic intentions. In a savage and sudden coup, terrorists hijack the vessel, turning a mercy ship into a floating bio-weapons lab.

A world away, SIGMA's Commander Gray Pierce thwarts the murderous schemes of a beautiful would-be killer who holds the first clue to the discovery of a possible cure. Pierce joins forces with the woman who wanted him dead, and together they embark upon an astonishing quest following the trail of the most fabled explorer in history: Marco Polo. But time is an enemy as a worldwide pandemic grows rapidly out of control. As a relentless madman dogs their every step, Gray and his unlikely ally are being pulled into an astonishing mystery buried deep in antiquity and in humanity's genetic code. And as the seconds tick closer to doomsday, Gray Pierce will realize he can truly trust no one, for any one of them could be . . . a Judas.