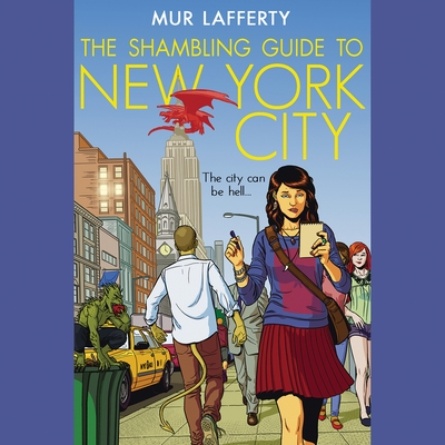 Because of the disaster that was her last job, Zoe is searching for a fresh start as a travel book editor in the tourist-centric New York City. After stumbling across a seemingly perfect position though, Zoe is blocked at every turn because of the one thing she can't take off her resume --- human.

Not to be put off by anything -- especially not her blood drinking boss or death goddess coworker -- Zoe delves deep into the monster world. But her job turns deadly when the careful balance between human and monsters starts to crumble -- with Zoe right in the middle.

"A wild ride through the secret side of New York City, Mur Lafferty's mighty debut is urban fantasy the way it should be: fast, funny, with bags of action and characters you'll love. A total delight from cover to cover."—Adam Christopher

"Looking for a very different kind of travel guide? One that shows you the real Manhattan? The one the tourists haven't discovered yet, but the vampires and the watersprites have? Then The Shambling Guide to New York City is just what you need!

With really interesting restaurant recs and sightseeing suggestions, and unusual (to say the least) takes on the Statue of Liberty and Grant's Tomb, it's got everything you need to know for the trip of a lifetime--or longer! And with the smart and intrepid Zoe to show you around, how could you possibly get in trouble? I give it 5 Michelin stars and 8 Zombie Planet Thumbs Up (with real thumbs)!"
—Connie Willis
"What, you thought only humans wanted to travel? Monsters are tourists, too."—New York Times bestseller Scott Sigler
"Mur Lafferty's debut novel is a must-read book for those who like their urban fantasy fast, furious, and funny. Terrific stuff!"—Kat Richardson
"Shows exactly why so many writers have been buzzing about Mur Lafferty for so many years: an unbeatable mixture of humor, heart, imagination, and characterization. I want to live in Mur's New York."—Cory Doctorow
"An engagingly funny, and fun, romp through NYC. You'll love Zoe... to bits."—New York Times bestselling Tobias S. Buckell
"Charming debut... an enjoyable tour of the city's supernatural side."—Publishers Weekly
"The hip, knowing and sometimes hysterically funny narrative, interspersed with excerpts from the guide of the title, lurches along in splendid fashion. Combine wit, style and acute observation: the result is irresistible."—Kirkus Reviews (Starred Review)
"Without Mur Lafferty, the SF genre would be a much duller place. Mur is constantly inventive, always great fun and deserves every success."—Paul Cornell
"This is a great start to what promises to be one of the gems of the comic urban fantasy crown. The Shambling Guide sets the wonderful world of the supernatural--and the slightly more esoteric world of travel guide publishing--on its ear, and the result is nothing short of delightful."—New York Times bestselling author Seanan McGuire
"Mur Lafferty is a bright, shining light in speculative fiction. She brings a warm, humourous and startling fresh voice to the genre in The Shambling Guide to New York City."
—Kaaron Warren


"Zombies and vampires and golems, oh my! The Shambling Guide to New York City rounds up the biggest cast of the undead and never-quite-alive ever to appear in a single novel, along with a wisecracking heroine whose picture belongs over the dictionary entry for spunky. This is a comic tour-de-force by a writer who lives and breathes popular culture. Mur Lafferty is throwing a monster party and you're invited."
—James Patrick Kelly, Hugo and Nebula Award Winner


"The Shambling Guide to New York City is a monstrously fun romp by one of our most engaging new authors."—Tim Pratt