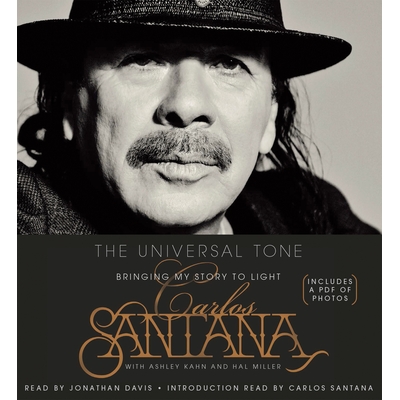 In 1967 in San Francisco, just a few weeks after the Summer of Love, a young Mexican guitarist took the stage at the Fillmore Auditorium and played a blistering solo that announced the arrival of a prodigious musical talent. Two years later -- after he played a historic set at Woodstock -- the world came to know the name Carlos Santana, his sensual and instantly recognizable guitar sound, and the legendary band that blended electric blues, psychedelic rock, Latin rhythms, and modern jazz, and that still bears his name.

Carlos Santana's unforgettable memoir offers a page-turning tale of musical self-determination and inner self-discovery, with personal stories filled with colorful detail and life-affirming lessons. The Universal Tone traces his journey from his earliest days playing the strip bars in Tijuana while barely in his teens and brings to light the establishment of his signature guitar sound; his roles as husband, father, recording legend, and rock guitar star; his indebtedness to musical and spiritual influences -- from John Coltrane and John Lee Hooker to Miles Davis and Harry Belafonte; and his deep, lifelong dedication to a spiritual path that he developed from his Catholic upbringing, Eastern philosophies, and other mystical sources. It includes his recording some of the most popular and influential rock albums of all time, up to and beyond the 1999 sensation Supernatural, which garnered nine Grammy Awards and stands as arguably the most amazing career comeback in popular music history.

It's a profoundly inspiring tale of divine inspiration and musical fearlessness that does not balk at finding the humor in the world of high-flying fame, or at speaking plainly of Santana's personal revelations and the infinite possibility he sees in each person he meets. "Love is the light that is inside of all of us, everyone," he writes. "I salute the light that you are and that is inside your heart."

"One of rock's true virtuosos and guiding lights." -- Rock and Roll Hall of Fame
"A thread runs through his multicultural, crossgenerational music: the unifying power of the human spirit." -- John Roos, Los Angeles Times
"Passion, soul, and that elusive thing called sabor come through the music of Carlos Santana. His is always a surprising sound, ahead of its time -- true world music before the term was even invented, but uniquely American in its multicultural reach....Santana is an artist who transcends musical genres and touches the heart across all generations." -- The Kennedy Center