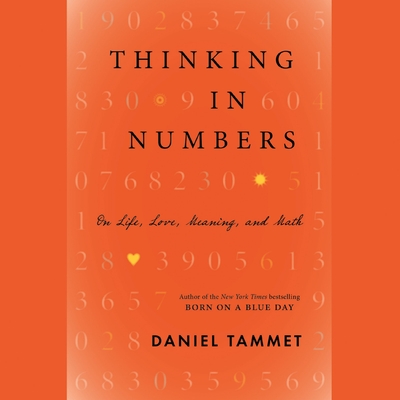 Inspired variously by the complexity of snowflakes, Anne Boleyn's eleven fingers, and his many siblings, Tammet explores questions such as why time seems to speed up as we age, whether there is such a thing as an average person, and how we can make sense of those we love. His provocative and inspiring new book will change the way you think about math and fire your imagination to view the world with fresh eyes.

"How many mathematicians are dazzling storytellers as well? As it turns out, numbers lend themselves powerfully to the realm of narrative, and no explorer of this region is more innovative than Daniel Tammet. What a joy to read an author whose dexterity with digits is matched by his wisdom with words." --David Eagleman, PhD, neuroscientist, author of Incognito and Sum
"Tammet is a master of gleaning profound insights from seemingly mundane trivia....This is a delightful book." --Publishers Weekly (starred and boxed review)
"A delightful, diverse collection of essays. Great fun and the perfect gift for any math-phobic person, young or old." --Kirkus Reviews (starred review)
"A engrossing blend of autobiography, mathematical theory, and 'what if' speculations, Daniel Tammet's essays allow us to see the world through the lens of numbers. The result is fascinating, even dizzying series of fresh perspectives on things we thought we knew." --Billy Collins
"Thinking in Numbers is a mind-expanding, kinetic aesthetic experience. My mind shot off the page, spurred to see universal patterns very much alive in everything from the natural world we share to how imagery and metaphor occur in my own creative process. Tammet's poetic mathematics are beautiful guideposts for thinking about life and even love. As I read, I found myself saying, 'Yes, this is true, and this is true, and this is so true...' " --Amy Tan
"Wonderful essays. Admirers of Tammet's Born on a Blue Day and Embracing the Wide Sky will find here fresh reasons to laud the author's gifts." --Booklist (starred review)
"As a child in the pre-digital, pre-calculator 1960s, I saved up my allowance money to buy a giant, used, office adding machine. So I approached Daniel Tammet's memoir of hyper-numeracy with a certain sense of kinship. But I was unprepared for the sublime beauty and thoroughgoing charm of his stories. Thinking in Numbers is a magnificently, movingly peculiar and wise book." --Kurt Andersen, author of True Believers and host of Studio 360
"Born on a Blue Day introduced us to the extraordinary phenomenon of Daniel Tammet, and Thinking in Numbers enlarges one's wonder at Tammet's mind and his all-embracing vision of the world as grounded in numbers." --Oliver Sacks, MD
"In Thinking in Numbers, you realize that no matter how personable the author or how elegantly breezy his tone, he is not like us. What a pleasure it is, however, to peer inside his utterly singular mind." --Smithsonian
"Tammet approaches numbers in a brilliantly oblique way. Modern readers may feel their jaws dropping at this book's many mathematical whimsies...A transcendent glimpse at a numerate world." --Science News
"Intriguing, provocative - to wrestle with numbers in this way is an adventure." --Lydia Davis, author of The Collected Stories of Lydia Davis
"Always informative, always entertaining, Daniel Tammet never loses his respect for the mystery of the universe of number." --J. M. Coetzee
"Autistic savant Daniel Tammet talks numbers, and he does so with evident inspiration and awe. Whether or not readers consider themselves mathematically inclined, they will be enthralled. Tammet enlivens his discussion of numbers with engaging personal components...that render his book a delightful read for a broader audience. This book will charm just about anyone, but will absolutely captivate sci-tech readers with an interest in mathematics." --Library Journal (starred review)