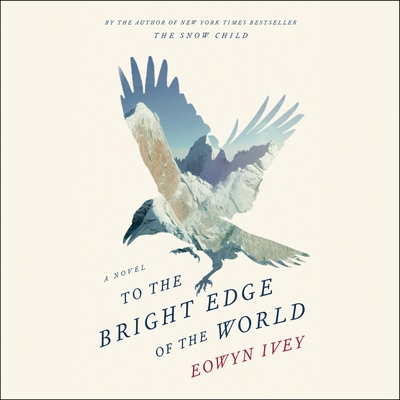 in stock
To the Bright Edge of the World
(Unabridged)
add to wishlist give as a gift Play Sample
An atmospheric, transporting tale of adventure, love, and survival from the bestselling author of The Snow Child, finalist for the Pulitzer Prize. In the winter of 1885, decorated war hero ...
add to cart

An atmospheric, transporting tale of adventure, love, and survival from the bestselling author of The Snow Child, finalist for the Pulitzer Prize.

In the winter of 1885, decorated war hero Colonel Allen Forrester leads a small band of men on an expedition that has been deemed impossible: to venture up the Wolverine River and pierce the vast, untamed Alaska Territory. Leaving behind Sophie, his newly pregnant wife, Colonel Forrester records his extraordinary experiences in hopes that his journal will reach her if he doesn't return--once he passes beyond the edge of the known world, there's no telling what awaits him.

The Wolverine River Valley is not only breathtaking and forbidding but also terrifying in ways that the colonel and his men never could have imagined. As they map the territory and gather information on the native tribes, whose understanding of the natural world is unlike anything they have ever encountered, Forrester and his men discover the blurred lines between human and wild animal, the living and the dead. And while the men knew they would face starvation and danger, they cannot escape the sense that some greater, mysterious force threatens their lives.

Meanwhile, on her own at Vancouver Barracks, Sophie chafes under the social restrictions and yearns to travel alongside her husband. She does not know that the winter will require as much of her as it does her husband, that both her courage and faith will be tested to the breaking point. Can her exploration of nature through the new art of photography help her to rediscover her sense of beauty and wonder?

The truths that Allen and Sophie discover over the course of that fateful year change both of their lives--and the lives of those who hear their stories long after they're gone--forever.

"To the Bright Edge of the World moves seamlessly through different times and different voices to depict an often harrowing journey that leads the central characters to question all that they 'have known as real & true.' Ivey's novel is a dazzling depiction of love, endurance, courage, and wonder, and a worthy successor to The Snow Child."
—Ron Rash, author of Serena

"Ivey's first novel, The Snow Child (a lovely retelling of an old Russian folk tale), was a runaway hit, an international best seller, and a finalist for the Pulitzer Prize. Her second work is even better!...This reviewer has never cared for epistolary novels, but Ivey not only makes it work, she makes it work magnificently. The personal nature, the immediacy of the writing puts the reader in the heart of the story, allowing one to become a participant rather than a mere observer."
—Library Journal, (Starred Review)

"Ivey deftly draws the reader into the perils of the journey...a compelling historical saga of survival."
—Booklist (Starred Review)

"All the pleasures of a great novel are here--the well-crafted sentence, the deft pacing, the compelling plot, and characters that we care passionately about. Add to those already significant achievements a few eerie hints of the supernatural, some nail-biting mystery/thriller drama, the understanding that's gained from historically accurate details, and the endorphin rush of a love story. And then consider that the novel's construction provides yet another pleasure, the pleasure of the puzzle, as the reader gets to participate in the assemblage of journal entry, letter, drawing, and artifact, therefore co-creating this epic Alaskan adventure. How can one novel contain such richness? Eowyn Ivey is a wonder."
—Tom Franklin, author of Crooked Letter, Crooked Letter

"A stunning and intriguing novel combining the epic adventurous sweep of Alaska with minutely beautifully observed details--the reader finishes it wiser and richer."
—Rosamund Lupton, author of Sister and The Quality of Silence

"To the Bright Edge of the World is a glorious feast of American mythology. In it, Eowyn Ivey's Alaska blooms vast and untouchable, bulging with mystery and wonder, and lit by an uneasy midnight sun. On this haunted stage, the lines between man and beast are blurred, and Ivey has etched her most compelling characters: the incorruptible, determined Sophie Forrester, who wrestles with the rules of men and polite society; and her husband, the explorer Allen Forrester, who struggles mightily against the uncivilized Alaskan wilderness with its ragged teeth. Gorgeously written, utterly un-put-downable, To the Bright Edge of the World sweeps its reader to the very brink of known territory, and presents that bright edge in stark relief: gleaming, serrated, unforgiving. As with The Snow Child, Eowyn Ivey has once again written a magical, breathtaking novel that I just cannot put out of my mind."
—Jason Gurley, author of Eleanor