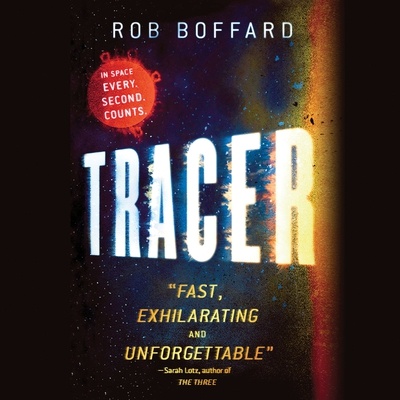 A huge space station orbits the Earth, holding the last of humanity. It's broken, rusted, falling apart. We've wrecked our planet, and now we have to live with the consequences: a new home that's dirty, overcrowded and inescapable.

What's more, there's a madman hiding on the station. He's about to unleash chaos. And when he does, there'll be nowhere left to run.

In space, every second counts. Who said nobody could hear you scream?

"Fast, exhilarating and unforgettable, and once you start it you can't stop." --Sarah Lotz, author of The Three

"A stunning debut that never lets up, from the nerve-jangling beginning to the explosive end." --James Douglas, author of The Doomsday Machine

"Ludicrously fast-paced, with a brilliant sci-fi setting, Tracer is an absolute blast of a read."—David Owen on Tracer
"Reading Tracer is like being on a rocket-propelled roller coaster and trapped in a supersonic pinball machine at one and the same time. The action flies by in a blur and leaves you as breathless and reeling as the protagonists. Riley Hale battles to save the last remnants of humanity from a homicidal maniac and a secretive suicide cult in the claustrophobic, brilliantly evoked world of a crumbling space station where danger lies around every corner. A stunning debut by Rob Boffard that never lets up, from the nerve-jangling beginning to the explosive end."—James Douglas on Tracer

"Tracer is the literary equivalent of a base jump: fast, exhilarating and unforgettable, and once you start it you can't stop. I loved it."—Sarah Lotz, author of The Three, on Tracer