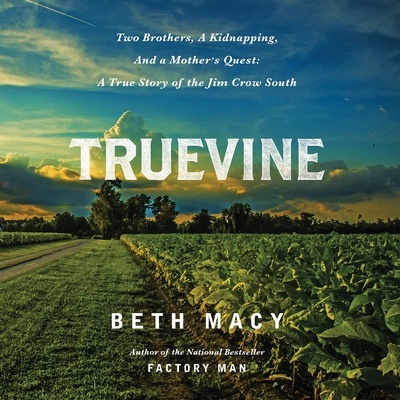 "This compelling account of one family's tragic exploitation provides an important lens through which America's tortured racial history and the cruel legacy of Jim Crow can be seen anew."—Bryan Stevenson, author of Just Mercy and founder and director of the Equal Justice Initiative
An "impeccably reported tale"—Tina Jordan & Isabella Biedenharn, Entertainment Weekly
"Nonfiction storytelling at its finest.... It does what the best business books should: It delivers a heavily researched, highly entertaining story, at the end of which you realize you've learned something.... This is a great American story, the kind that we don't read often enough."—Bryan Burrough, New York Times
"A consummate chronicler of the American South spotlights the extraordinary history of two kidnapped African-American brothers enslaved as a circus sideshow act... Macy vividly illustrates circus life during the 1920s, and she movingly depicts how the brothers' protective, determined mother, Harriett, eventually discovered and rescued them almost a decade and a half later... A sturdy, passionate, and penetrating narrative. This first-rate journey into human trafficking, slavery, and familial bonding is an engrossing example of spirited, determined reportage."—Kirkus (starred)
"A truly remarkable work of researched narrative nonfiction, one the probes every corner of its topic and values every subject who has something to say.... Factory Man does justice to every hidden corner of the story. It's a book that leaves you feeling better for having read it."—Lucas Mann, San Francisco Chronicle
"If over a hundred years ago there had been Black Lives Matter, the mother of George and Willie Muse would have joined and marched for the safe return of her sons. Back then, almost a century ago, she could only keep learning and finding folk who agreed she had a right to her family...a right to the love and protection of her sons. Beth Macy in Truevine has given us a stirring story of the persistence of faith...the strength of love...in this tale of a mother's journey to reclaim not only her sons but her right to them."—Nikki Giovanni, poet and one of Oprah Winfrey's "Twenty-five Living Legends"
"[An] astounding tale."—Colette Bancroft, The Tampa Bay Times
"Beth Macy has a way of getting under the skin of American life, burrowing into the seemingly ordinary to find the weird and wonderful taproots of our society. This true tale from rural Virginia will enrage you, inspire you, make you shake your head and rear your fist. And as the pages keep turning, you'll feel yourself slipping into a gothic world of freaks and geeks, and surreal racial thinking, that seems both deeply strange and yet, sadly, all too familiar."—Hampton Sides, author of In the Kingdom of Ice, Blood and Thunder, and Americana
Praise for Truevine

One of Vulture's 8 Books You Need to Read This October

"'It's the best story in town,' a colleague told Beth Macy decades ago, 'but no one has been able to get it.' She now has, with tenacity and sensitivity. She gives a singular sideshow its due, offering these 'Ambassadors from Mars' a remarkable, deeply affecting afterlife."—Stacy Schiff, author of The Witches
"A well-crafted and epic tale.... Artfully told."—Marc Levinson, The Wall Street Journal
Praise for Factory Man

One of Publishers Weekly Best Books of 2014: Nonfiction

"In a class with other runaway debuts like Laura Hillenbrand's "Seabiscuit" and Katherine Boo's "Behind the Beautiful Forevers": These nonfiction narratives are more stirring and dramatic than most novels. And Ms. Macy writes so vigorously that she hooks you instantly. You won't be putting this book down."—Janet Maslin, New York Times
"Truevine serves as a primer about racial inequality that all Americans should read."—Marilyn Smith of Kepler's, Literary Hub
"Taking us into the dark corners of American history that are discussed only in whispers, Beth Macy shines a bright light on the racial profiteering of circus freak shows and the Jim Crow South. In the remarkable Truevine, Macy manages to do what all the exploitative showmen wouldn't dare; she humanizes the Muse brothers, and in doing so, she has written an unforgettable story of both heartbreak and enduring love."—Gilbert King, author of Devil in the Grove
"The author's brightly written, richly detailed narrative not only illuminates globalization and the issue of offshoring, but succeeds brilliantly in conveying the human costs borne by low-income people displaced from a way of life.... A masterly feat of reporting."—Kirkus (starred review)
"Laying out her decades of journalistic persistence, [Macy covers] the uncomfortable aftermath that followed the boys' heroic rescue by their mother."—Boris Kachka, Vulture
"Macy's exploration of the long-hidden fate of two young African Americans and how that fate illuminates the atrocities of the Jim Crow South is as compelling as Rebecca Skloot's The Immortal Life of Henrietta Lacks...both are absolutely stunning examples of narrative nonfiction at its best...Certain to be among the most memorable books of the year."—Connie Fletcher, Booklist (starred review)