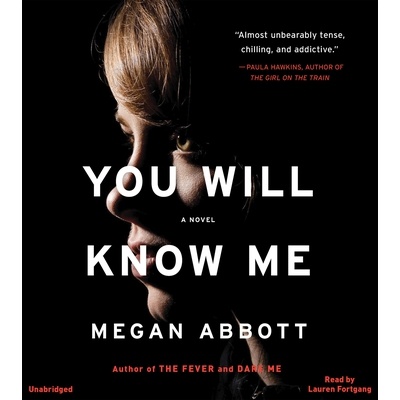 in stock
You Will Know Me
(Unabridged)
add to wishlist give as a gift Play Sample
The audacious new novel about family and ambition from "one of the best living mystery writers" (Grantland) and bestselling, award-winning author of The Fever, Megan Abbott. How far will you ...
add to cart

The audacious new novel about family and ambition from "one of the best living mystery writers" (Grantland) and bestselling, award-winning author of The Fever, Megan Abbott.

How far will you go to achieve a dream? That's the question a celebrated coach poses to Katie and Eric Knox after he sees their daughter Devon, a gymnastics prodigy and Olympic hopeful, compete. For the Knoxes there are no limits--until a violent death rocks their close-knit gymnastics community and everything they have worked so hard for is suddenly at risk.

As rumors swirl among the other parents, Katie tries frantically to hold her family together while also finding herself irresistibly drawn to the crime itself. What she uncovers--about her daughter's fears, her own marriage, and herself--forces Katie to consider whether there's any price she isn't willing to pay to achieve Devon's dream.

From a writer with "exceptional gifts for making nerves jangle and skin crawl" (Janet Maslin), You Will Know Me is a breathless rollercoaster of a novel about the desperate limits of parental sacrifice, furtive desire, and the staggering force of ambition.

PRAISE FOR YOU WILL KNOW ME:

"Almost unbearably tense, chilling and addictive, You Will Know Me deftly transports the reader to the hyper-competitive arena of gymnastics where the dreams and aspirations of not just families but entire communities rest on the slender shoulders of one teenage girl. Exceptional."—Paula Hawkins, author of The Girl on the Train
"What puts flesh on the bones of Abbott's flying cheetah of suspense is her insight into parenting, marriage, and various sorts of interpersonal rivalry...The characters of the adult women in this book, none completely likable, are knowingly depicted...Abbott [is] above other writers in this genre, making her something of a Stephen King, whose work hangs right on the edge of the literary while making your skin crawl."
—Marion Winik, Newsday
"Abbott's ability to build suspense and feed on readers' fear is nearly unparalleled...It's both terrifying and gripping."
—Meredith Turits, Elle.com
"Abbott is a master at getting inside the teen mind and then exploring its outer reaches. Now she delves into the fierce world of gymnastics, all-consuming desire and what it takes to create a true champion...Cloaked within a mystery is another story--about marriage, parenting and the sanctity of family."
—Darcy Jacobs, Family Circle

"Abbott seems to tap into that thing that makes ordinary teen girls so dangerous in that toxic mix of hormones and lack of sense of self, and then she dials it up a tick or two to homicidal."
—Richard Alley, Memphis Flyer

"The beauty of Abbott's writing, and the skilled way she weaves the men's lesser narratives into Deenie's story, make this a standout in contemporary crime fiction. Megan Abbott knows what girls are made of."—Clea Simon, The Boston Globe
"You Will Know Me hits that rarefied sweet spot between unnerving psychological suspense and a family drama with heart, inducing equal parts dread and unease, empathy and warmth. The pages couldn't turn fast enough...Luscious writing, a timely and unique premise, and an ending that will haunt you all summer long."—Jessica Knoll, New York Times bestselling author of Luckiest Girl Alive
"...brilliant...beneath the glittering carapace of Abbott's lush, skillful, subtle writing, it's impossible to know what we're supposed to think. One of the strengths of this novel is that it doesn't mind what we believe--it is cooly at peace with whatever our take on matters might be...we, as readers, are made entirely responsible for our own theories and conclusions. In that sense, this is an exceptionally plausible work of fiction...The wrong kind of ambiguity in a crime novel can be fatal. Abbott judges it impeccably here..all of this Abbott pulls off with groundbreaking skill...excellent."
—Sophie Hannah, New York Times Book Review

"Abbott has a knack for dissecting the dark, beating heart of the most all-American activity. Her Dare Me (2012) brought a Fight Club intensity to cheerleading, and her she captures ripped palms and the muscle-bound physiques that attract the cruel taunts of classmates. But this equally dazzling tale is set not in the teens' world but rather in the adult boosters' strange tribe, exploring the agony and urgency of their desire, the unknowability of others, and the burden of expectations laid on the gymnasts. It's vivid, troubling, and powerful--and Abbott totally sticks the landing."
—Booklist (Starred Review)

"[Abbott's] books are driven as much by intricate character development and rhythmic sentences as they are by plot. They could easily be shelved with literary fiction."
—Lucy Feldman, Wall Street Journal

"A smart, tense thriller about how far people will go to achieve a dream."
—Brenda Janowitz, Popsugar
"In true Abbott style, nothing is predictable here; the plot consistently confounds expectations with its clever twists and turns. Admirers of Patricia Highsmith, Laura Lippman, and Kimberly Pauley are in for a treat."—Library Journal (Starred Review)

"You Will Know Me takes you into the dark heart of family, a journey that feels more menacing with every page. Abbott cranks the tension up in this disturbing tale of exactly what we are prepared to do for our children--I was reading compulsively into the night. A beautifully written, gripping read that feels unshakably real."—Kate Hamer, The Girl in the Red Coat
PRAISE FOR THE FEVER:

"Megan Abbott has created a mesmerizing, modern portrait of teenage life today. . . The Fever holds true to its title: It's dark, disturbing, strangely beautiful and utterly unshakeable."—Gillian Flynn, author of Gone Girl
"The book to beat...in the 'Is it the next Gone Girl?' sweepstakes."—Janet Maslin, New York Times
"Stunning....Nothing should be taken at face value in this jealousy-and hormone-soaked world except that Abbott is certainly our very best guide."—Kirkus (Starred Review)
"The young crafter of simmering psychological thrillers alights once again on teenage girls and the hidden forces--ambition, love, envy--that tie them together and drive them apart, sometimes fatally."—Boris Kachka, Vulture
"If the phenomena that led to the Salem Witch trials were to revisit the world today, it might very well look like the scenario in Megan Abbott's engrossing, disturbing, panic attack of a novel, The Fever. In a time when suicide and pregnancy pacts can go viral, this story of mass hysteria in a high school is not only completely plausible -- it's impossible to put down."—Jodi Picoult, New York Times bestselling author of The Storyteller
"Megan Abbott is the mistress of noir."
—Sarah Bryan Miller, The St. Louis Post-Dispatch

"Thriller Award-winner Abbott (The Fever) takes a piercing look at what one family will sacrifice in the name of making their daughter a champion...Abbott keenly examines the pressures put on girls' bodies and the fierce, often misguided love parents have for their children."—Publishers Weekly (Starred Review)

"Is there anything Megan Abbott can't do? We will have to wait for the answer to that question because You Will Know Me continues her formidable winning streak. This story of an ordinary family with an extraordinary child is gorgeously written, psychologically astute, a page-turner that forces you to slow down and savor every word. And yes--please forgive me--she totally sticks the landing."—Laura Lippman, New York Times bestselling author of Hush Hush
"[Abbott] returns to the subject she always captures so intensely: the private desires of teenage girls."

"Megan Abbott's latest thriller plunges readers into the shockingly realistic life of young, female gymnasts whose severely regulated lives come with unthinkable consequences. Gritty, graphic, and yet beautiful and dreamlike in the way the story unfolds, You Will Know Me comes barreling at you with all the power and urgency of a high-speed train, as Abbott asserts herself as one of the greatest crime writers of our time."—Mary Kubica, New York Times bestselling author of The Good Girl
"[Abbott] is in top form in this novel. She resumes her customary role of black cat, opaque and unblinking, filling her readers with queasy suspicion at every turn."
—Jennifer Senior, New York Times

"Chock full of tension and suspense...gripping."
—Claire Stern, InStyle.com
"The twists are good, as they are in any page-turner worth its salt. But Abbott is exceptional because she writes characters that are as careful as her plotting."
—Kevin Nguyen, GQ.com
"Chillingly believable, beautifully written...You Will Know Me is Megan Abbott's best novel to date. A triumph."—Paula Daly, author of The Mistake I Made
"Like stepping into a world with slightly too little oxygen. Dark and compelling, this is a 2 a.m. novel."—Lucie Whitehouse, author of Before We Met
"You Will Know Me is powerful and unsettling, a portrait of a family where tenderness can mean pain as well as love. Megan Abbott is exceptionally good at teasing out telling moments to reveal deeply buried truths."—Jane Casey, author of The Missing
"Megan Abbott writes like a dream and grips like a vice. Weeks later, I still can't stop thinking about You Will Know Me."—Erin Kelly, author of The Poison Tree
"This spell-binding novel explores the darkness in teenage girls and gives insight into the disciplined world of elite gymnasts and the parents that get them there."
—Holly Parmalee, Serendipity Magazine

"If you think there's an American author writing about the thorny intricacies of female relationships with more smarts and verve than Megan Abbott, feel free to step forward and make your case."—Adam Sternbergh, Slate
"[Abbott] does killer teens better than anyone...Menace and more menace."
—Sheryl Connelly, New York Daily News

"The tension starts in the second paragraph of page one and insinuates itself brilliantly throughout, unsettling and wrong footing me. I read it, holding my breath like Devon before the big leap. Loved every minute."—Fiona Barton, author of The Widow
"Look out for the gloriously talented Megan Abbott. She's ruthlessly acute, funny, heartbreaking, lyrical, brilliant...I've loved every one of her novels, but none as much as You Will Know Me. Three weeks after finishing it, I still pick it up again, to re-experience the delicious pleasure I felt, devouring it."
—Joyce Maynard, New York Times bestselling author of Under the Influence

"Megan Abbott must have ice in her veins. In hijacking young-adult fiction for her own devious grown-up purposes, she writes from such a chilly remove you may want to turn up the thermostat. But the underlying tension she sustains is so beautifully unbearable, you may be unable to leave the couch."
—Lloyd Sachs, The Chicago Tribune

"[You Will Know Me] will keep you glued to your beach blanket."—Marie Claire