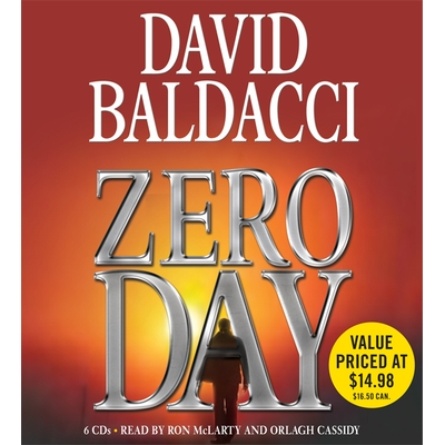 And Zero Day is where it all begins....

John Puller is a combat veteran and the best military investigator in the U.S. Army's Criminal Investigation Division. His father was an Army fighting legend, and his brother is serving a life sentence for treason in a federal military prison. Puller has an indomitable spirit and an unstoppable drive to find the truth.

Now, Puller is called out on a case in a remote, rural area in West Virginia coal country far from any military outpost. Someone has stumbled onto a brutal crime scene, a family slaughtered. The local homicide detective, a headstrong woman with personal demons of her own, joins forces with Puller in the investigation. As Puller digs through deception after deception, he realizes that absolutely nothing he's seen in this small town, and no one in it, are what they seem. Facing a potential conspiracy that reaches far beyond the hills of West Virginia, he is one man on the hunt for justice against an overwhelming force.

David Baldacci is one of the world's favorite storytellers. His books are published in over 45 languages and in more than 80 countries, with over 110 million copies in print. David Baldacci is also the cofounder, along with his wife, of the Wish You Well Foundation, a nonprofit organization dedicated to supporting literacy efforts across America. Still a resident of his native Virginia, he invites you to visit him at www.DavidBaldacci.com and his foundation at www.WishYouWellFoundation.org, and to look into its program to spread books across America at www.FeedingBodyandMind.com.

"Zero Day is a nifty, paranoid thriller disguised as a murder mystery, and Baldacci advances it at a speedy clip with a nice mix of intrigue, tantalizing clues and the occasional explosion...Baldacci's books are fast-paced battles between good and evil."—Richmond Times Dispatch
"Readers expect excitement and intrigue in David Baldacci's books, and Zero Day is no exception...As Baldacci's new hero narrowly escapes countless close calls, the pairing of the author's imagination and knowledge create a wild ride for the reader. Puller is gutsy, brash and likable. Best of all, he survives to reappear in the next book of this new series."—The Free-Lance Star